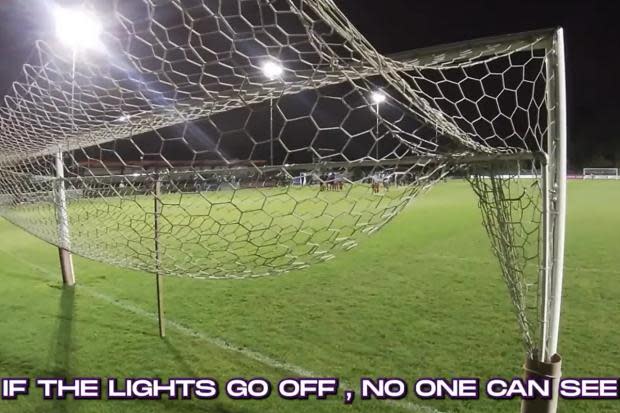 In the video which is shared on Twitter, The Wall can be heard celebrating their victory and reaching their first ever cup final.

Footage is filmed from the corner of one of the goal posts, and a male voice can be heard saying that’s why they “will never have The Wall, or the SE Dons again”.

The Wall are a grassroots football team, playing in the Orpington and Bromley District Sunday Football League Senior Division.

The voice in the video then goes on to say “without respect, we can’t tell them to fuck off because they just won’t listen to you”.

Wall FC are still celebrating the win in the background, as the comment continues ‘SE Dons will never play here’.

Another male voice can be heard agreeing and saying “our gardener said the same thing after their cup final”.

A voice can then be heard saying “I’ll turn them off, lights out” before laughter emerges from those who appear to be behind the camera.

The caption of the video reads someone saying “Funny thing is if the lights go out no one can see them.” The audio is unclear at the beginning of this sentence although the “nobody can see them” part seems to be said.

Another man can then be heard weakly responding to the racist comment: “Oi, don’t say that out loud again.”

“It has no place in society and as a club we strive to be inclusive and open to every individual in the community.

“We are cooperating fully with the London FA’s investigation into the heinous incident of racism which followed The Wall against FC Elmstead at Eden Park Avenue.

“As part of the investigation, the club is working tirelessly to identify the individual responsible for these remarks.

“The comment was not made by any club official.

“As befits such circumstances, any individual will be treated in the harshest possible manner.”

Bromley Police say they “acknowledge the community concerns that have been expressed following the sharing of a video online”.

Superintendent Andy Brittain said: ‘I am aware of the video which has been shared on social media.

“The comments that may be heard there are unacceptable and have no place on a football pitch or anywhere else in society.

“The comments have understandably upset people in the local community and over the next few days we will be engaging with them and providing all the support we can.

“The club concerned has issued a statement which we welcome.

“Although we have not yet received a formal complaint, management will be in contact with club officials to determine further action to be taken.”

Do you have a story for us? You can contact us here.

Subscribe to our newsletters to receive updates directly to your inbox.