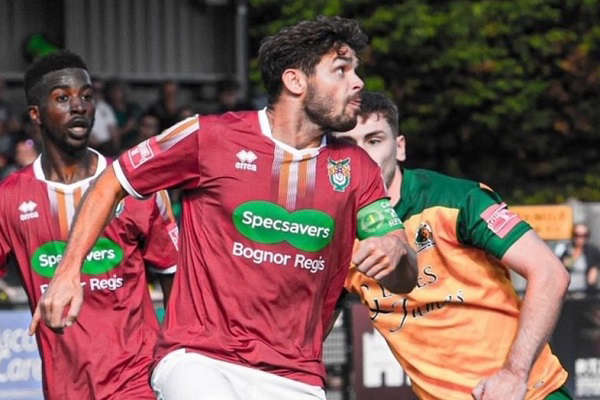 Bognor boss Robbie Blake has been given a huge boost ahead of Isthmian Premier League clash with Herne Bay today at Nyewood Lane with the news that Harvey Whyte is fit again.

Skipper Whyte has been out of action since sustaining an ankle injury in the 2-2 home draw against Cray Wanderers in the FA Cup on September 3.

Now he’s back in the frame after training last night and Blake has included the dynamic schemer in his squad for the game against Team Kent.

The rocks are still without Calvin Davies, Joe Rabbetts and Jake Flannigan but Whyte’s return is a big bonus, Blake says. He added: “Skipper has been training and feeling good and he’s done enough to be involved at some stage, whether or not it’s from the start, we’ll have to wait and see.

“He has a lot of experience and is our captain, so having him back with us is very positive.”

Bognor enters the game after a 1-1 draw at Enfield Town on Tuesday in a game the visitors could easily have won. But Blake says the draw counts for nothing unless his team can pull off two wins in the next two games.

He added: “We have Herne Bay on Saturday and then we are at home again on Tuesday when we play Bowers & Pitsea. The players know we want six points from those games if we are to continue our progression. They are more than capable to get the victories.”