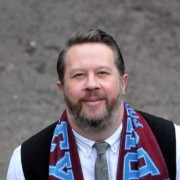 An outgoing sportswriter has warned football clubs they ‘need the local media’ as he is stepping down from the regional press after 28 years of covering the same team.

Chris Boden has urged clubs, particularly those outside the Premier League, to work with their local newspapers after bidding farewell to the Burnley Express.

Chris, pictured, has covered Burnley FC for the Express since 1994, first as a reporter and more recently in his current role.

His call for a better working relationship between clubs and journalists comes after Burnley chairman Alan Pace, who has not spoken to the local press since before the end of last football season, recently said during from a Q&A with Burnley College students that “having a conversation in Tesco is just as valuable as having someone interview you”.

In a series of farewell messages on TwitterChris wrote: “I’m not at all convinced this is healthy – particularly at a club which behind the scenes has seen huge numbers of loyal, long-serving staff leaving the club since the takeover.”

He added: “Obviously I’m biased, but I strongly believe that football clubs need the local media and vice versa, especially those outside the Premier League. This has been demonstrated since the first game of this season. season, after which only locals attended press conferences.

Chris, who has supported the club since 1983 when he was eight, has reported on Burnley from over 120 stadiums for the Express.

But he also revealed that the current state of the workforce in the industry convinced him it was “time for a change”.

Chris said: “The industry has been tough for quite a while now, with staffing levels and resources trashed, and it’s not quite the job it was. So I’m off to an exciting new challenge in PR and communications, giving back my evenings and weekends.

He will now become a public relations and communications specialist with Lancashire Teaching Hospitals NHS Foundation Trust, based in Preston.

He told HTFP: “It was just time for a change, after all this time I wanted my evenings and weekends back. I have two boys aged six and three and would love to take them to football when they will be ready.

“Life in the industry has also been difficult since around 2009. We started with staff cuts back then and it only got worse over time. Staff and resources tend to go to larger centres.