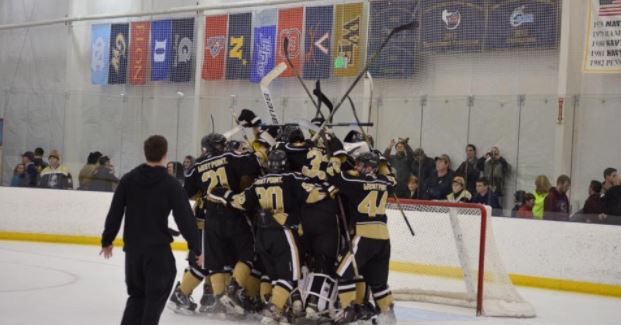 College hockey: before the football game, the army and the navy renew the rivalry on the ice

While the Army-Navy rivalry dates back to the late 1800s, the chapter that includes hockey is much more recent.

Until 2012, there was no sane way for the Army and Navy to compete on the ice. The Army has had an NCAA Division 1 program for many years, while the Navy’s top hockey team competes at the ACHA D1 level. In most cases (but not all) this difference creates a great disparity in talent level and would have put the Navy at a disadvantage.

However, in the fall of 2012, the West Point Online Hockey Club (made up of ice hockey players) made the decision to reform the club into an ice hockey team competing at the ACHA D2 level. This decision allowed the army and navy to compete within the confines of an ice rink. In January 2013, the Black Knights and Midshipmen made history when the first-ever Army and Navy hockey game was held at the McMullen Ice Arena in Annapolis.

This Friday night, Army has another chance to score the second victory against the Navy D1 team to date. The two teams will take center stage and face off at 8 p.m. EST at the American Dream Mall, a few miles from MetLife Stadium. With the vast majority of Army-Navy hockey games taking place at Tate Rink (West Point) or McMullen Ice Arena, the American Dream Mall presents arguably the second most notable venue in which teams have played (behind the Madison Square Garden, 2016).

Let’s see how the teams compete against each other.

The Navy’s ACHA D1 team competes with a 7-8-2 record, which keeps them in the ranking of their Eastern Collegiate Hockey Association conference standings. For the contenders, Michael Rockovich and Brendan Reynolds lead the way in points with 18 and 13 points respectively.

At net, Charles Doherty has most of the playing time, starting 14 games. With a 6-5 record, he has a 2.71 goals against average and .917 save percentage.

The Army’s ACHA D2 (8-1-1), a member of the Super East College Hockey League, lead a 7-game winning streak and are currently ranked 9th in the Northeast region of the division. The Black Knights are led by Cadets Mark Lehman and Caleb Kaiser, who are tied with 9 points each. Defender William Kiley follows closely with 6 points.

In goals, Timothy Kiley and William Eckland have a split time. Kiley leads the pair with a 1.27 goals-against average and .949 save percentage, while Eckland is undefeated, posting 5 and no loss during his quarter.

Unfortunately there is no live stream of this game (as far as I know) so the only chance to catch the game is if you are in town for the Army-Navy football game and can make it to the dream. American Rink in the mall to throw the puck.

With a dominant Army team facing off against an intermediate Mids team, now is the time for the Black Knights to win the second game against the Navy D1 team in program and series history. I’ll be interested to see the result, and would recommend following both teams’ Twitter accounts for possible score alerts and game updates on Friday.