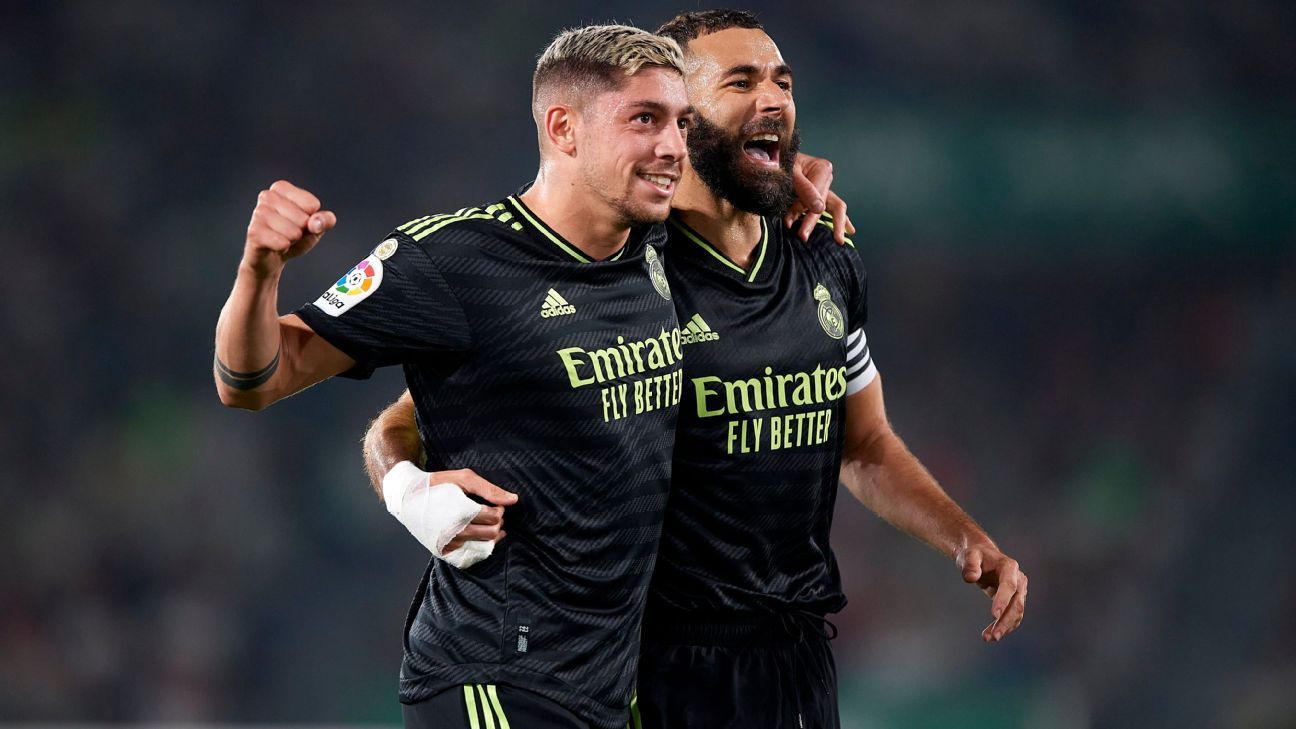 Federico Valverde, Karim Benzema and Marco Asensio scored to give Real Madrid a comfortable 3-0 victory over Elche in La Liga on Wednesday and the leaders also had three goals disallowed by VAR for offside in the preparations.

Madrid top the table with 28 points, six ahead of second-placed Barcelona, ​​who are one game short and host Villarreal on Thursday.

The champions dominated the game from the start and had several chances other than the three attempts dismissed, the first in the 6th minute when a strike from Benzema, who won the Ballon d’Or on Monday, was dismissed for offside against Vinicius. Jr.

In-form Valverde put Real ahead in the 11th minute with a brilliant technical strike from the edge of the box, after an effort from Benzema bounced off the defence.

It was his third goal from distance this season and no player has scored more goals from outside the box than the Uruguayan in Europe’s top five leagues this season.

“I’m happy for the team and for the win, I appreciate the way we’re playing at the moment,” Valverde told DAZN.

“Ancelotti told me that if I didn’t score at least 10 goals this season, he would retire.

“So that’s my goal, I don’t want to be blamed for the coach’s retirement,” Valverde joked with a smile.

“I took the risk of saying 10 [goals]let’s hope he can score four more!” Ancelotti joked. “He’s fine, he surprises me a bit, he’s doing everything well at the moment, in attack and defense, his runs, a modern player.

Alaba put the ball in the net in the 25th minute after a fine combination with Benzema, who found it with a wall pass, but the goal was ruled out for offside.

The third goal Real ruled out was in the 60th minute when Benzema slotted in from a Dani Carvajal cross, but the full-back was inches clear of the defensive line in the build-up.

Elche had a golden chance to level the scores in the 70th minute, but goalkeeper Andriy Lunin denied them with an incredible reflex save from a close-range header from Carlos Clerc.

Benzema finally extended Real’s lead in the 75th minute after a fine interaction with Rodrygo, who assisted the France international with a clever back heel pass.

Substitute Asensio added the third one minute from time, firing from close range into Rodrygo’s cross.

“I was worried about this game, it was important, because after the Classic you could think the level could drop, I wanted to shoot but I didn’t want to give them any excuses,” added Ancelotti.

“The team played well, concentrated, in attack it was very good, we had a lot of mobility. But until the 70th minute the game was open, they could have equalized.”

Information from ESPN’s Alex Kirkland was used in this report.