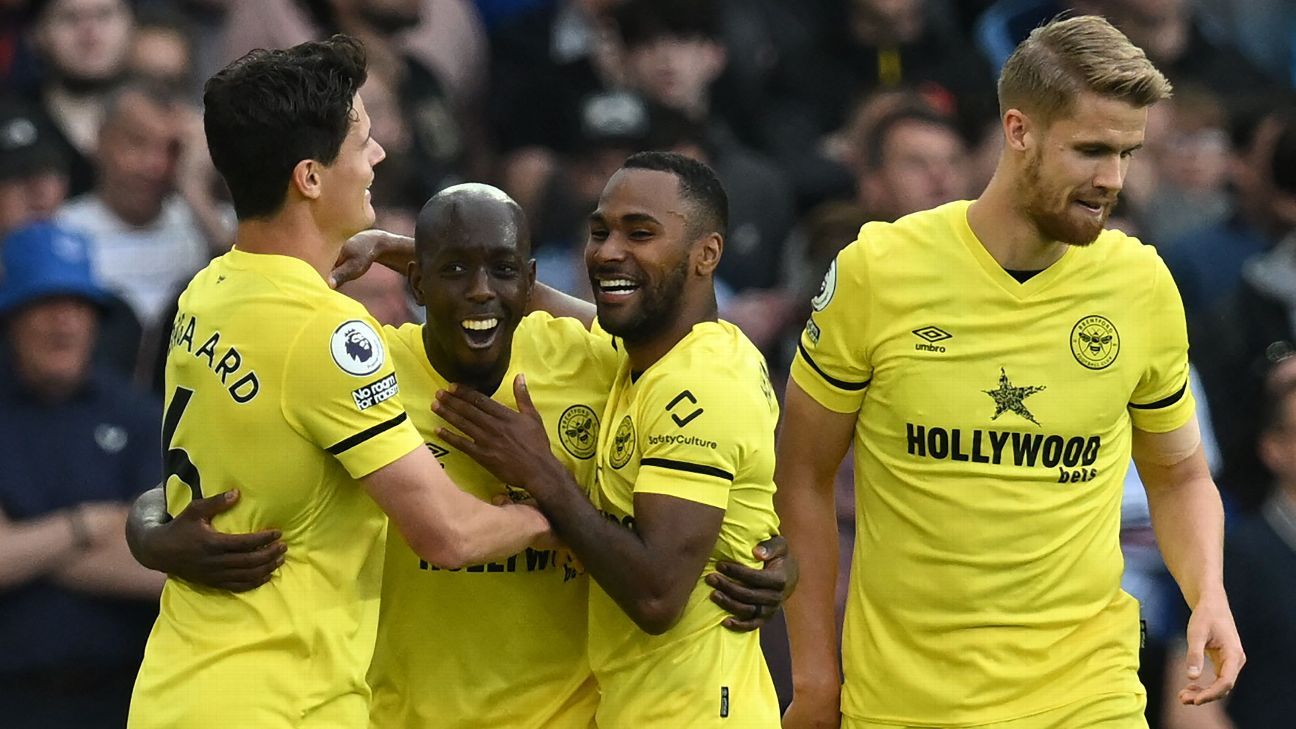 Yoane Wissa created a goal and netted another as Brentford deepened Everton’s Premier League relegation troubles with a thrilling 3-2 win at Goodison Park on Sunday that left the Merseyside club, who finished with nine men, always in danger.

Everton’s brilliant start was rewarded with a first goal since August for Dominic Calvert-Lewin, but their day turned sour when teenage centre-back Jarrad Branthwaite was rightfully sent off for a professional foul after 18 minutes.

Brentford took control after that as Wissa forced Everton captain Seamus Coleman into his own net, although Richarlison restored the home side’s advantage from the penalty spot to give his side a 2-1 lead at halftime.

But two headed goals in 121 seconds just after the hour mark from Wissa and Rico Henry, and a late red card for Salomon Rondon, gave Brentford a victory that leaves Everton two points ahead of relegation third Burnley with both teams having two games remaining.

Everton will have another chance to retain their top-flight status by hosting Crystal Palace on Thursday and then traveling to Arsenal on the final day of the campaign.

Brentford host Leeds United next Sunday in the final game of the season for both sides, with the Elland Road side also facing relegation.

“It was a battle. The manager said we had to match the intensity and that’s what we did,” Henry told Sky Sports.

“We knew we had to dig into this and stick together. We want to finish in the top 10. We’ll bring it to Leeds.”

After Calvert-Lewin edged Everton up front, the game turned when Branthwaite cut off Ivan Toney’s heels as the last defender.

Coleman headed Wissa’s cross into his own net, before Richarlison won and converted a penalty, but Brentford used their power play to good effect and turned the screw in the second half.

They were back level after Christian Eriksen’s corner was superbly blocked at the near post by Wissa, whose looping header drifted past the other side of the net.

Worse was to follow for the hosts moments later when Henry headed Christian Norgaard’s cross into the net, with Everton’s lack of height at the back following Branthwaite’s red card sorely exposed.

“Very frustrating,” Calvert-Lewin said. “We started so well. A big decision went against us and it was tough from there. We took the lead and we defended, defended but unfortunately it went against us.

“It’s still in our hands. The discussion after the game was positive. We need to rest and recover and work as hard as we can on Thursday.”

The referee suffered cardiac arrest during a football match at Mansfield