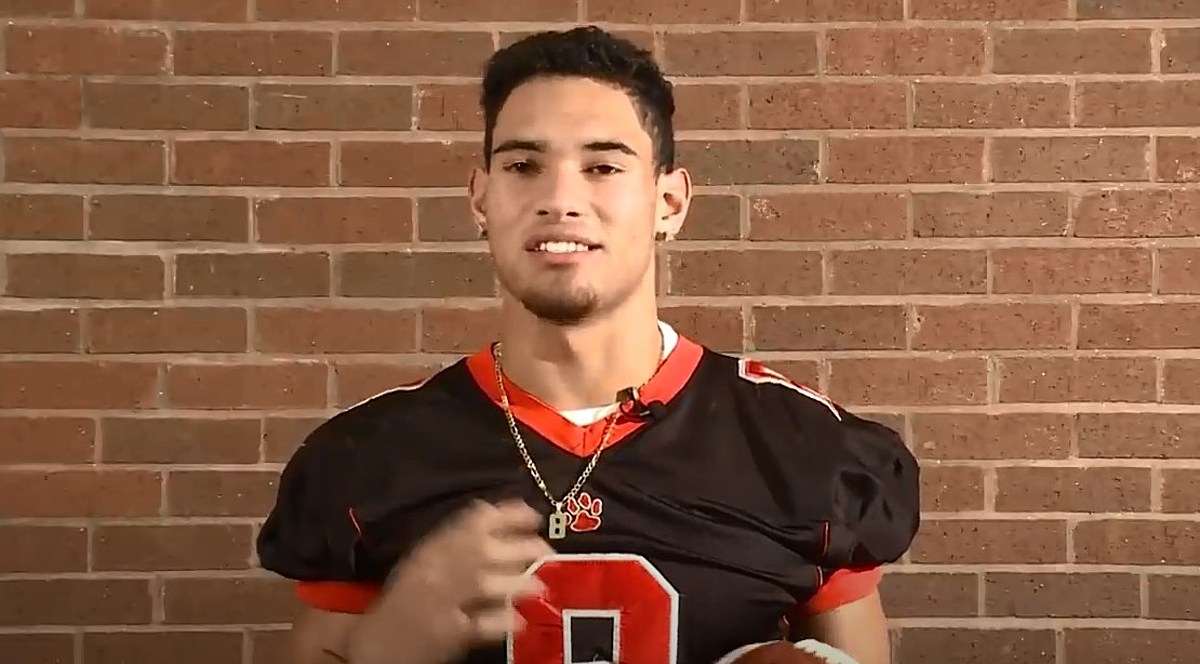 Jackson Mitchell is a former Ridgefield High School football player who made his mark at the college level for the UCONN Huskies.

According to the UCONN Huskies website, the junior linebacker was named Week 9 winner of the New England Football Writers Association Gold Helmet Awards presented by the Jack Grinold/Eastern Massachusetts Chapter of the National Football Foundation.

On Saturday, Mitchell and his Huskies teammates beat Boston College 13-3 for the first time in program history, the series dating back to 1908. this game alone, Mitchell had 12 tackles, one interception, one sack, forced a fumble and recovered a fumble. The Huskies have played nine games this season, and Mitchell has had double-digit tackles in 5 of them and has a total of 100 tackles on the year. In short, this kid is a dog!

UCONN is 4-5 on the year but appears to be moving in the right direction for the first time in a long time.

We talked about Jackson on the Ethan, Lou & Large Dave Morning Show on Halloween (10/31/22), you can listen below.

On Friday, someone asked me if I knew Jim Mora Jr. was now the head coach. Saturday morning College Gameday on ESPN, did a segment on how Mora lives in a haunted house in Storrs, yesterday (Sunday) I heard about UCONN upsetting BC, then Monday I heard talk about the Jackson Mitchell award. That’s a lot of UCONN football, in no time, does that mean they’re back? Is UCONN becoming a college football powerhouse in the next few years?

That would be great, considering the men’s basketball team isn’t what it used to be.

PS I saw a picture of Jackson on the UCONN website and noticed he had a CT state tattoo on his right arm. I found this fascinating, I don’t think I’ve ever seen a CT state map tattooed on someone before. I’ve seen New York, California and even Las Vegas but never Connecticut. It’s proof that this kid is mentally and physically tough because that tattoo is only going to invite a verbal beating. Look, I really love CT, but most people don’t. We don’t have a great reputation nationally and we’re the most self-loathing US state. Good for Jackson to have some hometown pride.

You may remember Jim Mora’s father…Jim Mora. He had the most epic football press conference in football history.

I’ve been an Oakland/LA/Las Vegas Raiders fan since I was a kid and am often outnumbered in NFL conversations, but not completely alone. In the NFL, there are fans of all kinds in every city in America.

Before the Raiders lost the playoff game to the Bengals last weekend, I reached out to my friends who are Raiders fans and asked them to send me a photo of them wearing a jersey or celebrating the team in one way or another. I had a great response and it started some fun sports conversation, but that was for Raiders fans only.

I wanted to give the same opportunity to all NFL fans in the Greater Danbury area whether their team is in the playoffs or not. I sent out the call on my radio show and on social media and here are the responses I received.

Recently I took a poll to find out which city has the worst traffic problems in the Greater Danbury area. I began to classify the cities in order of aggravation.

The cities to consider were:

Respondents were all current or former residents of the Greater Danbury area. I also made sure to garner some hilarious comments. #1 is the worst, with the most complaints, and #7 is the best city, with the fewest complaints. I counted all the respondents’ votes, and that’s how it all went.

I’ve watched the NFL all my life and although the game has changed drastically over my 42+ years, but one thing remains the same, you have to be a “tough guy” to get into the league. At this level of athleticism, all players are strong and physical, but some are clearly better than others. In parts 1 + 2, I featured John Lynch, Bill Romanowski, Troy Polomalu, James Harrison, Maxx Crosby, Reggie White, Earl Campbell, Mean Joe Greene, Mike Singletary, and Brett Favre. Here are some of the players who go above and beyond, pass the eye test and were downright scary on a football pitch. These are “Some of the NFL’s Most Feared Badass of All Time – Part 3”