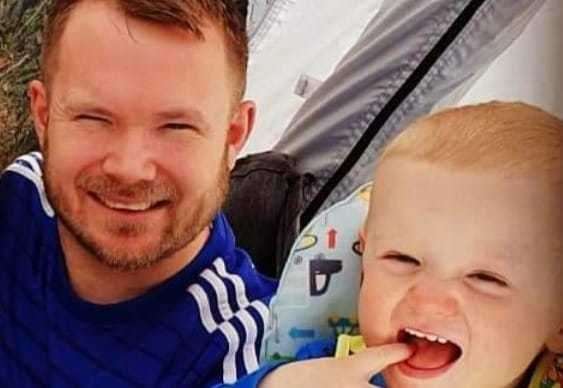 A football game to raise funds for the air ambulance in memory of a father and son killed in a traffic accident will take place this weekend.

The family of Andy and Joshua Hoyle, from Dartford, organized a day to support the association after their deaths in the Frant crash earlier this year.

Andy, 36, died in the incident on the A267 on August 18 and his two-year-old son died of his injuries in hospital nine days later.

Their family say they are “forever grateful” to the Flying Doctors for being able to spend nine precious extra days with Joshua to say goodbye and “kiss him goodnight.”

The game is free with a donation requested to be poured into the buckets on the doors and a raffle with over 60 prizes donated by businesses in the region.

Activities including a bouncy castle, stalls, a beat the goalie challenge, an ice cream van and a cupcake stand will start from 11am and the match will start at 1pm.

Raffle tickets are available the same day at the Sainsbury’s ground or customer service counter in Crayford, where Andy worked nights, for Â£ 5 per strip.

One of the prizes includes a signed Chelsea FC shirt donated by the club Andy supported.

Andy’s older brother Shane has organized the day with his other brother Ian, who will both play for the KSSAA team when they face the charity Mental Health United.

Shane said: â€œMy brother used to play football with Ian a lot so a lot of the people we have on the team are the ones my brother would have known.

â€œIt was nice meeting all the people who knew him and all the love people showed for Andy and Joshua and my family.

“It is sometimes overwhelming and incredible to see the generosity of people you don’t know.”

Andy and Joshua’s family say they support the KSSAA, which does not receive government funding, after they manage to transport Joshua to hospital.

Shane added that he recently visited the team’s base at Rochester Airport to meet with them.

“They are not government funded so every Â£ 1,200 we have raised is one trip so we have done 10 flights so far and it costs them Â£ 120 for a blood bag they still have to pay for that and don’tâ€¦ get it from the government, â€Shane said.

a online donation page has already raised over Â£ 6,500 for the KSSAA, with Shane hoping to top up Â£ 10,000 with donations and match day proceeds.

The KM group is committed to helping the community through the KM Charity team. For more information and to find out about other good causes you can get involved with, click here.

Read more: All the latest news from Dartford