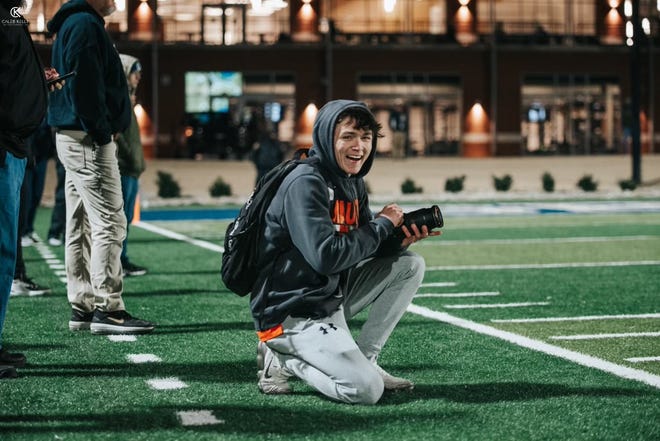 MAULDIN – The appearance of social media has become, especially in recent years, a stronger presence at all levels of athletics.

Trending videos, professional photographers, videographers and social media personnel assigned to specific colleges at many NCAA levels. Full-time staff who handle videography and photography duties for all of the college football programs. It is a booming profession that has taken off in recent years.

Mauldin High School, in many ways, tries to do many of these same things. But just at the AAAAA level of high school football.

Hype videos recounting the preparation for Friday night’s match under the radiant lights. The program’s Instagram is littered with captivating images and promotional graphics.

For football Mauldin: It takes the work of a young man. His name is Kevin DaSilva, 19, of Simpsonville.

He is the “Creative Director of Media” for Mauldin High School Football, a title that was created on the fly – as rare as the role is when it comes to high school football staff. He ran the social media account and worked as a videographer and photographer chronicling the Mavericks season last fall.

He is a paid member of the coaching staff, technically an employee of Greenville County Schools. And he’s chasing his dream, leading the way, and said he’s not planning on going to college to pursue it.

“If someone said ‘Kevin DaSilva’, the word that wouldn’t come to mind would be ‘creative’. Like, I guess maybe now but before? No,” DaSilva said with a laugh. I think of creativity, I think of someone who can draw – and I can only draw stick figures.”

He aspires to work in creative media for a career. He hopes this will take him to higher levels of sport: Maybe college or the professional ranks.

And he aims to help make the Mavericks’ social media and creative content some of the best in the state.

DaSilva is a spring 2021 graduate of Mauldin. He is also a former longtime player and special teams starter for the Mavericks, spending two years in college. His football memories, well, he can sum them up in images that are less exciting than some of his productions.

The memory he described on the phone took place against TL Hanna. He was on his knees as a starter on an extra point attempt, “we had just scored and had to kick the PAT to tie it up,” DaSilva said.

“And the snap was a little low – definitely not the most ideal snap in the world and I tried to pick it up and run with it – it didn’t go well,” DaSilva said flatly. He’s candid about his sporting escapades as a starter and long snapper, two of the most unknown positions on the gridiron until something bad happens.

But how he got here, to the point where he swapped a football and a uniform for a camera and a laptop, started in March 2020.

“It was March 2020 in my mid-40s,” DaSilva said. “I was just super bored, lying in my house all day – I have nothing to do and I’m scrolling through IG and I saw these highlight reels.

He started looking for a camera to feed the new creative urge. His first time filming something came soon after, when he shot videos of a training session for friends as part of the soccer program.

However, his former manager and current Mauldin head football coach Sayre Nesmith said he had seen the seeds of it before this year. Nesmith, who was on Mauldin’s staff for nine seasons in various roles before being named head coach in April 2020, had an extra coaching allowance and always struggled with social media, “it’s definitely one of my weaknesses,” he admitted.

“Somewhere, as an upperclassman, I saw his creative side come out,” Nesmith said when asked about DaSilva’s coaching. “And he started designing T-shirts and things of that nature for the Mauldins (special teams)…they had their own little club, that was pretty cool to see. When COVID came along, he gave me a Mauldin specialists mask where they had their own logo and things like that.

“That creative side, we started seeing that his senior year and that led me to believe, ‘OK. This kid has a future in the creative field.'”

So this past offseason, Nesmith had a light bulb moment. He called DaSilva and asked what his plans were, the kid who started lugging around a camera in the spring of his senior year agreed to meet him for a new role.

“I thought I was going to have to convince him,” Nesmith said. “Because a coaching stipend isn’t that expensive, and I knew it was going to be a ton of work for him. Because he also does a ton of stuff with our official movie…he puts stuff on our HUDL account, part of his official duties.”

“(So) I decided to take the job and that’s where I’m at right now,” DaSilva said. He said he was paid $3,500 for the season as a football staffer. And his role has taken him from the sidelines all over upstate – to the Under Armor All-American game that aired live on ESPN in Orlando, Florida.

DaSilva, in many ways, goes against traditional stereotypes of athletes. He let his creative side take over and chart his course while staying connected to his alma mater.

He talked about composure, composition and framing – all key factors when capturing a still image or emotions with the click of a button. His attention to detail, which can be attributed to the positions he held on the football pitch.

Now he has his own website, at 19, trying to chart his own course while running the football program‘s media department because, in addition to other help he receives from time to time, a man -orchestra.

“He’s done a great job and it’s great to work with a former player as well,” Nesmith said. “He’s done a tremendous job of being able to separate personal and professional (life) because all the guys – they were his teammates last year and now he’s a paid member of staff. So that took some time out of him. maturity and a lot of professionalism to do what he did this year.”

DaSilva and Nesmith said that although they have both received kudos for the solid work that has been done, no other school has contacted them. But DaSilva said random people came up to him and told him to keep going, or they saw his work.

“Football is really where I gained an audience and grew as a creator,” DaSilva said. He said he never really expected to be in this kind of role. But that was one of the best decisions he made.

His close friends, he says, supported him in pursuing his dream. While others had apprehensions, mainly about his decision not to study it at university. But DaSilva said they came when they saw his work.

“I don’t know if there are too many high school football teams using a coaching allowance for their media,” Nesmith said, “but I thought it was so important.

“Especially with the way things are going in this era of high school football.”

Joe Dandron covers high school sports and more for The Greenville News. Contact him at jdandron@gannett.com and follow him on Twitter: @JoeMDandron. Send your scores, stats, story ideas and feedback to 864Huddle@gannett.com.