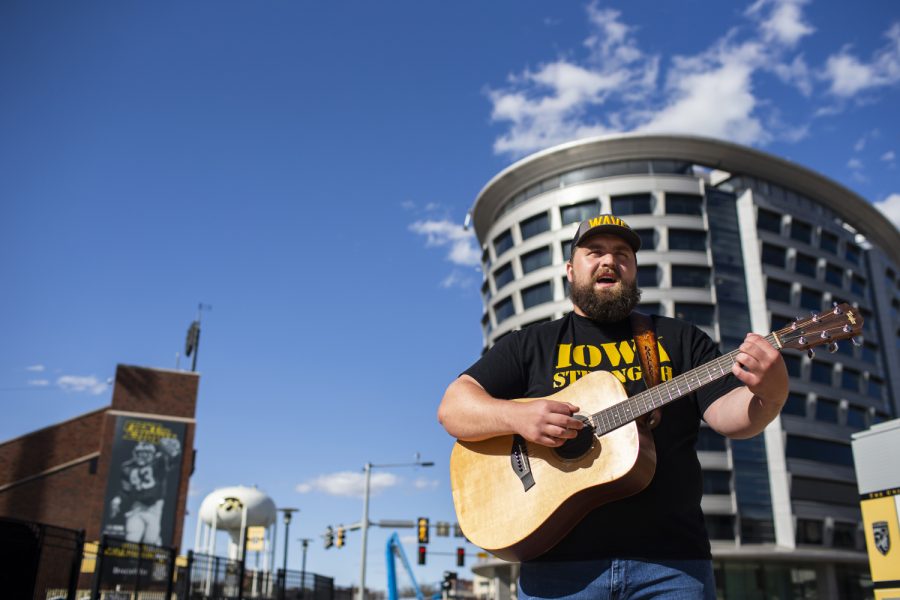 While playing for the Hawkeyes, Dalles Jacobus wrote a song about the Hawkeye Wave.

This week, he became a contender for the new lore anthem.

When the University of Iowa announced on April 21 the Twitter that he was looking for a new song for the Hawkeye Wave, Jacobus was tagged several times in the replies to his song.

Created by our fans, the #HawkeyeWave has become the sport’s greatest tradition.

Five years later, we need you to choose the new sound behind the moment.

Submit a song nomination or share a personal story at https://t.co/kC2g25nGg3.

“I had no idea about any of this until… people started tagging me in the post,” he said.

Jacobus posted a shorter version of the song on Twitter which attracted a lot of attention.

“I took to Twitter and was like, ‘I think I can help you here,’ and posted a little snippet of the professional version of the song,” he said. “This just exploded. Like, I think it has more interactions than the original tweet.

Jacobus said he had always been into music but never thought of pursuing it.

“I’ve always liked that,” he said. “I did show choir, chamber choir, acapella choir, all of that in high school, but athletics was where I was striving.”

RELATED: The University of Iowa will change the song of Hawkeye Wave

In an email to The Iowan DailyUI PR manager Chris Brewer wrote that the old wave song, “Wave on Wave” by Pat Green was recorded in 2020 by the Hawkeye Marching Band to hold the rights to this song.

“As our fans select a new song, the university will take the next steps with the use of the song. This will happen during the first verification process when eight songs go through the first fan vote,” Brewer wrote.

While on the Hawkeye football team, Jacobus was able to pursue his love of music by learning to play the guitar.

After purchasing, Jacobus began to learn how to play by watching YouTube. He said it wasn’t until 2021 – after initial closures of public spaces due to COVID-19 – that he started playing live shows.

“It was the perfect time for me,” he said. “Everyone is excited to be out, I can go bomb a show and people are just happy to be out, so I decided to go.”

Jacobus said the idea for his debut song “We Wave” came to him while on a fishing trip.

“The chorus came to mind just out of the blue, like no particular reason just came to mind,” he said. “I’m like, ‘Guys, I’m writing a song. “”

Jacobus performed the song for his friends and family at a bonfire where someone recorded it and posted it on Facebook.

The university asked to publish the song after the original publication, said Jacobus, who also gained a lot of traction.

“One of the first times I heard it, like when he sang it entirely, just makes you emotional because it takes you back to those times and kind of puts you in the shoes of family,” said Beyer.

UI sophomore Kenzie Kroll was one of the first to Tweeter about “We Wave” in response to the UI message. She said the song offers a unique perspective on the Hawkeye Wave.

“I thought the song was great, and it really summed up the feeling you have when you’re in the stadium and you kind of take a break from the intensity of the game,” she said. “You can salute and appreciate that for a moment.”

The Hawkeye Wave is what fostered Kroll’s love for the Hawkeyes, she said.

“It’s a pretty emotional time,” she said. “Some of our very close family friends had spent a lot of time with one of their kids in the hospital…they’re really honestly the reason I’ve always been such a big Hawkeye fan.”

Beyer said the song was significant because it came from a former player.

“I think the lyrics really portray the meaning of the wave,” he said. “It kind of gives the real meaning and like a former player experience and how it is for them, and you know, a fan too. It kind of encompasses everything you can think of, in a way, but it also has a personal aspect to it.

Beyer said he remembers the first time he waved from the field.

“You can just take a few moments away from it all and kind of realize that there are bigger things in the world than football and all that stuff,” he said. “It’s a really cool moment.”

Jacobus said the attention he’s gained has been confusing, but he doesn’t want to lose the focus and reason behind the Wave. The song has been completed, but the full song’s release date has yet to be announced.

“The last two days have been amazing,” he said. “But, you know, ultimately it’s not about the song playing, it’s about the act and the real wave.”