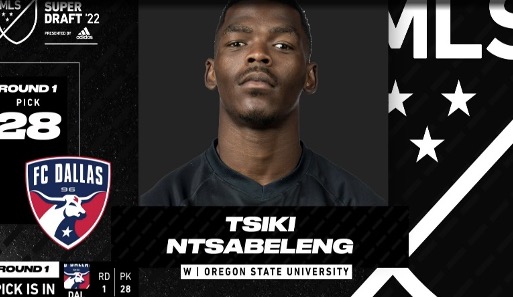 Katlego “Tsiki” Ntsabeleng has become the latest South African soccer player to sign for a major international soccer club in 2021. Major League Soccer (MLS) team FC Dallas announced on Wednesday January 12, 2022 that the club secured the services of Ntsabeleng after his impressive performance in the 2021 campaign at Oregon State University.

In an MLS web report, it was stated that FC Dallas “continued their busy 2022 MLS SuperDraft on Tuesday by securing the No. 28 pick (first round) via a trade with New York City FC and selecting the Oregon State forward Tsiki Ntsabeleng.In return, 2021 MLS Cup champions NYCFC received $50,000 in allocation money and the No. 34 SuperDraft pick (second round).

The 23-year-old Daveyton-born footballer honed his skills at the University of Johannesburg (UJ) when he was enrolled for a sports management qualification. He played for UJ in local leagues and the FNB Varsity Football tournament before playing for the South Africa national under-20 team, reserve team Mamelodi Sundowns and second team Kaizer Chiefs in the Multichoice Diski Challenge (MDC).

His success in the United States is the result of his impressive exploits in the South African national under-20 team. Ntsabeleng’s talent impressed Kyle Timm when the young national team took part in the COSAFA Cup in Zambia in 2018. Timm recruited Ntsabeleng to join Coastal Carolina University in the United States.

He was part of the SA Under20 and Chiefs MDC teams that won the Multichoice Diski Shield and COSAFA championship in 2017 and 2018, respectively.

“I have no words to describe the feeling. I thank God for the blessing. I have never missed a UJ football game my son played in Gauteng and I was there for every game he played. played in Johannesburg. I only watched him on TV when he was playing in distant provinces. I have supported and trained him since he was 9 years old.

He adds: “One thing I would like to urge our local professional teams to do is to encourage young people to continue their post-matric education even when they start playing professional football.”

Ntsabeleng received a full scholarship at CCU in 2018. It was there that he graduated. While studying at CCU, he was injured. While nursing his injury and looking for a team, he enrolled in a master’s degree (2020-2021) at Oregon State University, which later helped him overcome his injury issues.

“I would also like to urge young people to take their education and talent very seriously. Football and any other talent goes a long way when supplemented with education. Young people should not indulge in alcohol. Please stay away from drugs and any other form of addiction,” the father says, emphasizing the importance of education for young people.

At UJ, Ntsabeleng excelled under former South African left-back Bradley Carnell as a coach. Carnell launched his coaching career at UJ and guided the UJ team to their first FNB Varsity Football tournament final in 2014. He continued his coaching prowess with the technical team of Orlando Pirates F.C.

A few weeks ago, Carnell was also announced as the newly appointed head coach of St. Louis CITY SC in the United States after spending a year with New York Red Bulls.