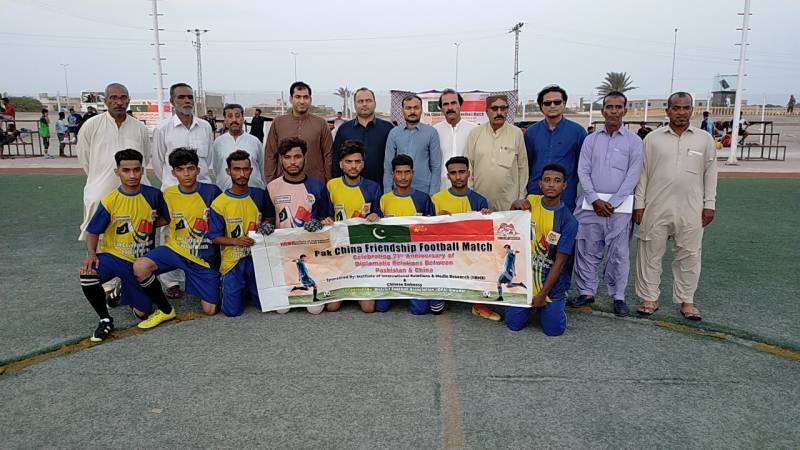 Ushering in a new era of cementing China-Pakistan ties and promoting local games in Gwadar, the first “Pak-China friendly football match” was held at the futsal football pitch along Marine Drive which runs along bustling Gwadar Beach.

Fascinated and thrilled by local spectators, the Pak-China friendly football match was held as part of the commemoration of the 71st anniversary of the establishment of Pak-China diplomatic relations under the auspices of the Chinese Embassy in Islamabad and in collaboration with the Institute of International Relations and Media Research (IIRMR) and District Football Association (DFA), Gwadar.

Facing the enchanting sea of ​​Gwadar that spells unimaginable dynamism, the Futsal Football Ground where the friendly Pak-China football match marked a new chapter of Pak-China romance took everyone by storm. Apparently, it rocked due to its mesmerizing natural features like Gwadar beach on one side and beautiful mountain on the other, coupled with a huge response from the audience. It reminded people of an iconic sensation “Gwadar Cricket Stadium” which gained huge fame nationally and internationally. Among the highlights of Gwadar, Fustal football ground has now become the testimony of the genesis of the ties between the people of Pak-China and the people of Gwadar.

After glancing at the banner erected on the ground reading “Pak-China Friendly Football Match“, child spectator Mir Shahid (14) said it was incredibly attractive and the merit credits to China for making this possible.

The Pak-China friendly football match let the local people know about Chian’s ambitions overflowing with friendship and sociability. He debunked the smear campaign that China doesn’t care about local people and came here to plunder locals as a new colonial master. The game revealed a vicious international agenda and brought people closer to China.

On the occasion, Chinese Consul General Karachi Li Bijian said that holding such matches would help the youngsters of Gwadar polish their football credentials,” he said. He urged to make this decision durable to boost the football game in Gwadar.

The President of the District Football Association DFA Gwadar, Mir Arshad Kalmati Pak-China, is a tangible success of China’s sincere efforts to nurture warm ties with the local people of Gwadar. “Since China entered Gwadar, other works were going on but these sports activities were lacking. Now, the inauguration of a football match glorifying the inseparable friendship between Pakistan and China has given a clear signal that China respects and cares about what the Gwadar people love and care about,” he said. added.

“We expect more such games and Chinese cooperation, especially synergistic collaboration with the Institute of International Relations and Media Research (IIRMR) in the future,” he said. added.

The main guest, Additional Assistant Deputy Commissioner Gwadar Zakir Ali Baloch said that these sports will make the best move in creating connectivity between people and magnifying social contact with the local people of Gwadar. “In my view, it will also establish a solid foundation of resilient relations between the sports community in Gwadar and China,” he added, saying that the pursuit of continued cooperation in the games will bring deep harmony and proximity between the two countries.

IIRMR President Yasir Habib Khan said the Pak-China friendly football match has proven to be a stepping stone to engage the youth of Gwadar and pledged that the younger generation of Gwadar especially those who channel their energies in football sports, would also be supported in the future in cooperation with China and DFA Gwadar. . “The youngsters of Gwadar have natural talent and they just need a pat on the back. Fortunately, China is with us and will make sure to give them maximum financial and other assistance so that Gwadar footballers can prove their worth on the national, regional and international stages,” he added.

Gwadar football fan Razwan Baloch said it would be an amazing sport for Gwadar football fans to see their favorite teams play a quality game of football. “Lack of funds is always a barrier to producing national level players. We desperately need such support. The youths of Gwadar pay tribute to China, IIRMR and DFA for making a joint effort to elevate the game of football in Gwadar,” he added.

The final match was won by Capt Gafoor Mehr Football Club. The chief guest handed out winning trophies and cash gifts to the players.

Fustal Football Ground is located at the foot of Koh-e-Batil, one of the famous hills in the south of Gwadar city at an altitude of 470 feet. It’s not new, rather it’s been around for decades. The municipal administration has rehabilitated it and transformed it into a modern football pitch. The grass, the installation of floodlights and the construction of the pavilion cost an estimated amount of Rs 6 million.