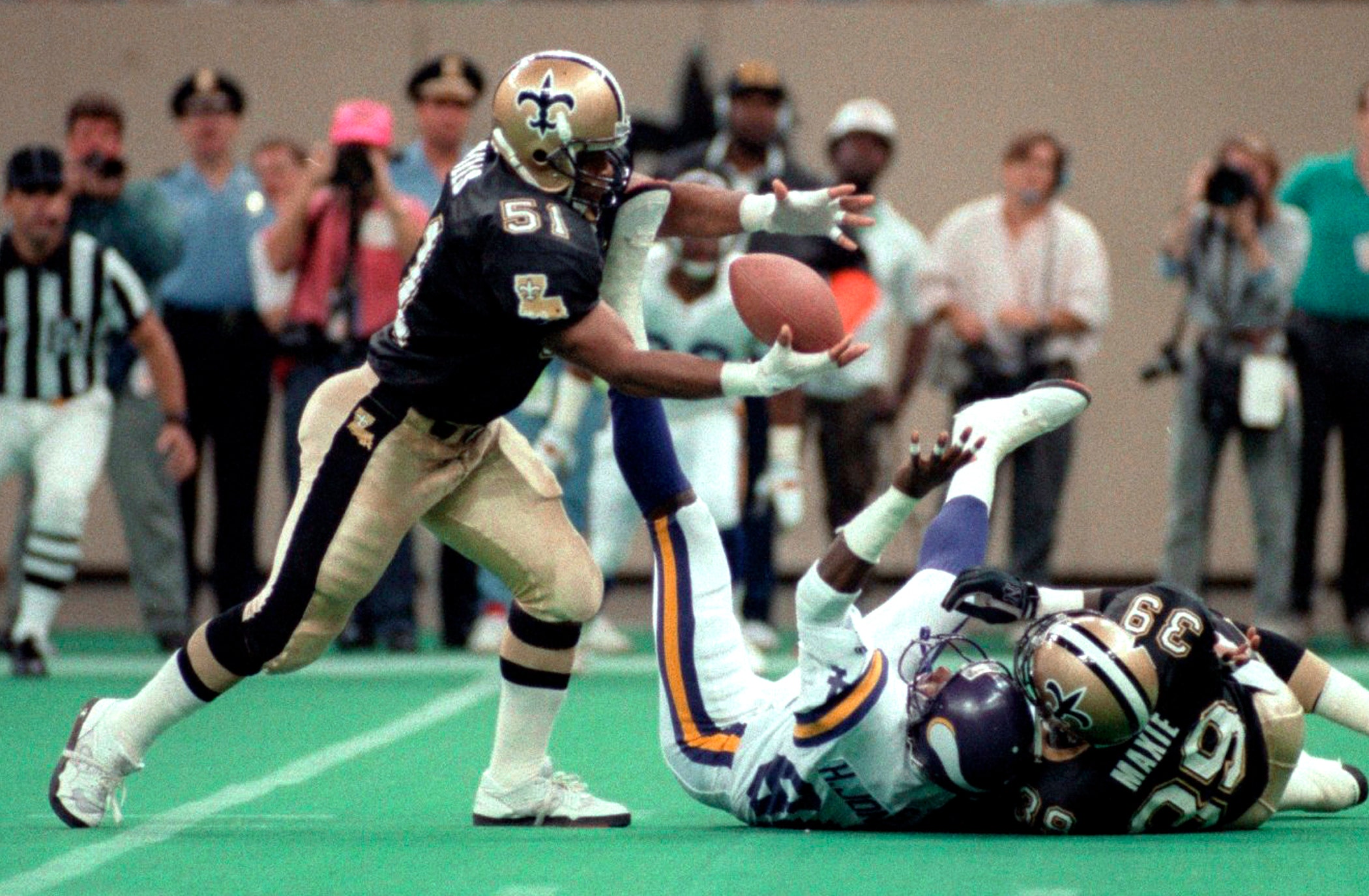 Perhaps the late Sam Mills would have been a top-notch college freshman and high NFL draft pick if someone had invented — as the 5-foot-9 linebacker memorably suggested — “a computer to measure the heart”.

Mills played Division III college football and was undrafted. It made his rise to stardom with the New Orleans Saints and Carolina Panthers — and his induction into the Pro Football Hall of Fame in Canton, Ohio, over the weekend — all the more remarkable.

The player nicknamed Field Mouse had the will to “keep beating”, as he put it. This has made him an inspiration to people facing long struggles in many aspects of life, from undersized football hopefuls to cancer patients.

“I’m emotional talking about him and I always have been, because that damn guy was special,” said Jim Mora, who coached Mills in the USFL with the Philadelphia and Baltimore Stars and then with the Saints. “I loved the guy.”

Former Saints quarterback Bobby Hebert was struck by how little Mills looked like an NFL player in public. Not only was Mills a bit shorter than the average guy on the street, but he wore prescription glasses and had an air of politeness and approachability.

“He was a straight, straight guy, great, just down to earth,” Hebert said, noting that Mills also led Bible studies with the Saints. “Not only was he a leader, like the Xs and O’s, but also a spiritual leader. … Sam was as tough as they come on the pitch and a perfect gentleman.”

“You know, I go to the same division, from the Saints to the Falcons, and I’m a mercenary,” Hebert said. “Sam is a hero for” New Orleans and Carolina.

Mills was part of New Orleans’ notorious “Dome Patrol,” which included Hall of Famer Rickey Jackson, as well as Vaughn Johnson and Pat Swilling, and is widely cited as one of the best four-linebacker units. in NFL history.

Saints players who looked down on Mills in defensive groups “all looked up to him,” Mora said. “Maybe they felt like he was gifted. He wasn’t. He was just so good.”

Outside Panthers Stadium stands a statue of Mills wearing his No. 51 jersey. Mills spent the last three of his 12 NFL seasons in Carolina. In 1996, his second with the Panthers, he was named All-Pro. He also became a coach with Carolina and was an assistant when he was diagnosed with bowel cancer before the 2003 season.

Sam Mills of the New Orleans Saints catches a fumble during the team’s NFL football game against the Minnesota Vikings on September 22, 1991 in New Orleans. Mills played Division III college football and was undrafted. It made his rise to stardom with the Carolina Saints and Panthers and his induction into the Pro Football Hall of Fame in Canton, Ohio over the weekend all the more remarkable.
(Ellis Lucia/The Times-Picayune via AP, file)

Mills continued to coach while undergoing treatment and gave what is known as his “keep beating” speech on the eve of the club’s Super Bowl game with New England at the end of that season.

“When I found out I had cancer, there were two things I could do: stop or keep beating,” Mills said at the time. “I am a fighter. I kept fighting. You are fighters too. Keep fighting!”

Quarterbacking that Panthers team was Louisiana native Jake Delhomme, who grew up watching Mills call the Saints’ pre-snap defensive signals, fearlessly shrug off offensive lineman blocks that overshadowed him, then plant running backs on their backs.

“I’ve always kind of revered Sam Mills,” Delhomme said. “I was this young boy who was like, ‘Dude, that’s the undersized guy. That’s the guy who made it. That’s the field mouse.'”

During the speech, “you felt this emotion”, recalls Delhomme. “It was like, ‘Oh my God, let’s put on the uniform now. Let’s play right now!'”

But Delhomme’s most poignant memory of Mills came earlier this season, days after a loss to Dallas. Delhomme recalled feeling sore, sluggish and uncharacteristically sorry for himself as he walked into practice. Then Mills ran past, slapped Delhomme on the back and said, “Let’s go, let’s get better.”

Delhomme refers to this moment as a wake-up call in which he said to himself, “You have to grow up and try to be just one-tenth of that guy.”

Mills was only 45 when he died in April 2005. “Keep beating” remains the Panthers’ slogan.

“He lived ‘keep beating,’ and that resonates with people because it’s real and because it’s not just a sports thing,” said Mills’ eldest son, the defensive assistant coach of the Washington Commanders, Sam Mills III.

“I feel honored to have had the chance to work alongside someone who touched the lives of so many people,” added Mills III. “You see how many people he’s affected by his history of being small school or being small. And then when you go post-cancer you see how many other people who have nothing to do with football would come and talk to him about their fight I feel privileged to have been a part of that – to see what it has meant to people, to see what stopping and talking to someone for two minutes out of your day means to people.

When Mills was playing high school football in Long Branch, New Jersey, he never expected to go to college until his coach persuaded him. He was good enough at Montclair State to receive invites to training camps with the Cleveland Browns and Toronto Argonauts of the CFL. Neither team kept him due to concerns about his height, and he returned to New Jersey to teach photography at East Orange High School and serve as an assistant football coach.

But when the USFL was preparing for its inaugural season in 1983, Brown’s coach Sam Rutigliano, never comfortable with Cleveland’s decision to cut Mills, encouraged Philadelphia Stars general manager Carl Peterson to look at it seriously.

Mora, then the Stars head coach, recalled linebacker coach Vince Tobin saying, “I don’t care how tall he is. This guy is a football player.”

When Mora began to assess Mills more closely, he noticed that Mills was fast, had exceptional lower body strength, and that his short stature could be an asset.

Linebackers are taught to place their shoulder pad level below that of the player they are trying to tackle, as this gives them leverage. Having also been a wrestler in high school, Mills knew all about leverage and taking down opponents.

Mills never wavered in practice and always made meetings on time, Mora said. He wasn’t just a racehorse either. He could cover tight ends and running backs out of the backfield, and his positional solidity and anticipation of QB intentions helped him effectively cover players who were taller than him.

When Mora was hired by the Saints in 1986, he persuaded the club to sign Mills.

In 181 NFL games, Mills had 1,265 tackles, recovered 23 fumbles, forced 22 fumbles, had 20 1/2 sacks and intercepted 11 passes. He was also part of the first four playoff teams in New Orleans Saints history and the first in Panthers history.

“It was hard to find negatives about the guy on or off the pitch,” Mora said. “He probably would have had a great future as a coach. He knew the game, he studied the game and had always prepared himself mentally. The players would have loved playing for him.”

Mora has coached other Hall of Famers – household names including quarterback Peyton Manning and wide receiver Marvin Harrison. Seeing Mills walk into the room will be rewarding for Mora in a different way.

Many football fans “only know about Sam Mills if they’re shrewd, older footballers,” Mora said. “He’s one of the best guys I’ve ever coached, but I still have to explain a bit about who Sam Mills was.”