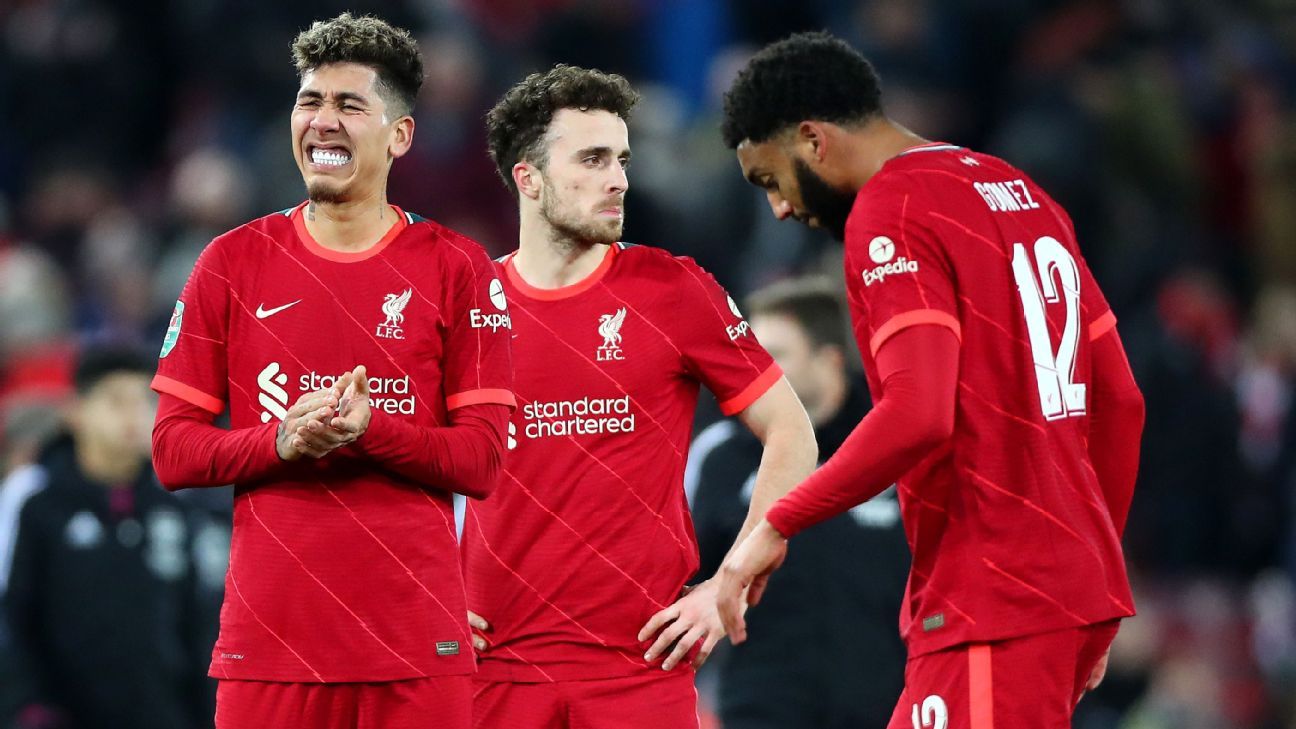 Arsenal played for over an hour with 10 men but were able to resist pressure from Liverpool to claim a goalless draw in the first leg of the Carabao Teams Cup semi-final.

The game’s key moment came in the 24th minute when Arsenal’s Granit Xhaka was sent off for denying Diogo Jota a clear goalscoring opportunity with a high foot that brought down the Liverpool striker just outside. Arsenal’s penalty area.

The incident necessitated a change in tactics from Arsenal to a three-man defence, with Mikel Arteta bringing in Rob Holding for Eddie Nketiah. It was the second early substitution for the away team, after Calum Chambers replaced the injured Cedric Soares in the 11th minute.

But while Liverpool then dominated territory and possession, they were only able to register a shot on target in the second minute of second-half stoppage time through Curtis Jones.

Their best chance had come moments earlier, but Takumi Minamino blazed from 10 yards out after Aaron Ramsdale’s weak punch landed on him.

Minamino had already come close twice on the left side, first with a misfiring cross that flew low just after half-time and then, midway through the second period, via a cross shot that also went past the post at the end of the Anfield Kop.

Arsenal struggled to create scoring chances but came close in the 72nd minute; After being found by Kieran Tierney’s cross from the left, Bukayo Saka had a shot saved by advancing Liverpool keeper Alisson.

“We are delighted with the situation,” Arsenal manager Mikel Arteta told Sky Sports. “The players showed a great fight, determination, brotherhood. You saw the emotion, we never gave up. Thanks to the boys.

“I don’t know if the red card inspired them but it took the fight. You need a certain attitude to play in these games and the boys did that. We played the game we had to play , which is not our game. I didn’t see it again, they checked it so probably a red card.”

The meeting at Anfield was originally scheduled to be the second leg of the semi-final, but the venues changed when last week’s encounter was postponed due to a coronavirus outbreak in Liverpool.

And both teams were missing a number of key players on Thursday for COVID-related reasons – Arsenal announced before kick-off that Martin Odegaard had tested positive – as well as injuries and Africa Cup of Nations commitments. .

“We would have preferred to score the goal rather than them getting a red card,” Liverpool manager Jurgen Klopp told Sky Sports. [to score] and we had to change the line-up for obvious reasons [before the game].

“In the second half we made some changes, I thought it looked better and we had clear situations but it wasn’t good enough. But it’s a two-legged game and it’s the half -time. I can’t remember when it was 0-0 at half-time, wherever I was, and I was like ‘we don’t have a chance. We’ll give it a shot.’

The second leg will take place at the Emirates Stadium on January 20. (LIVE broadcast on ESPN+ in the US); the winners of the encounter will face Chelsea in the final on February 27.