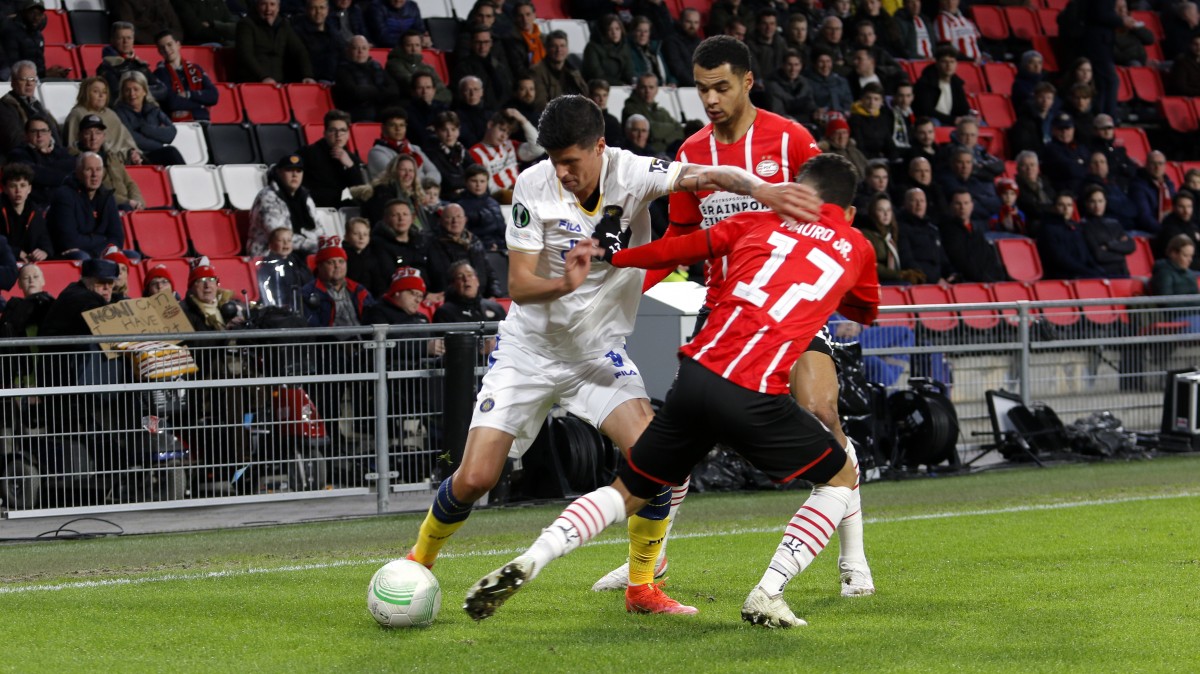 Maccabi arrived at the Philips Stadium in Eindhoven for the Conference League Round of 16 first leg against PSV, which is the second knockout tie in as many years.

Maccabi coach Mladen Krstajic made two changes from the side that beat Hapoel in the Tel Aviv derby at the weekend as Matan Baltaxa moved into the left side of the defense at the expense of ‘Ofir Davidzada. Enric Saborit and Idan Nachmias lined up as two centre-backs in front of goalkeeper Daniel Peretz while Andre Geraldes completed the back-four at right-back. Dan Glazer, in the role of presenter, led the team wearing the captain’s armband with Eden Shamir at his side in the engine room of the midfield. Dan Biton, who provided two assists, and Gabi Kanichowsky, who scored a goal, both kept theirs while Djorje Jovanovic, who scored the injury-time winner, replaced Eylon Almog as attacking partner of Stipe Perica.

The electeix atmosphere at Philips Stadium showed no sign that only a third of the 35,000 seats were allowed. The hosts looked dominant from the start as Maccabi tried to adapt to the pace of PSV. The deadlock was broken 11 minutes from the start when Mauro Junior and Cody Gakpo exchanged passes down the left flank before the 22-year-old cut inside and sent a low shot that beat Daniel Peretz at the first post. Two minutes later, Peretz pulled off a superb save to deny Noni Madueke’s powerful close-range header. As Maccabi tried to get into the game, PSV nearly doubled their lead, but Peretz saved another Erick Gutierrez header this time. In the 26th minute, Maccabi reached their best chance after Eden Shamir was fouled on the corner of the box before Dan Biton curled the free-kick forcing Joel Drommel to kick the ball in for a corner.

In the 37th minute, Dan Glazer was cautioned by Swedish referee Glenn Nyberg following a tackle from the edge of the box on Noni Madueke. Eran Zahavi came forward to take the free kick but his powerful curling shot just missed the target. 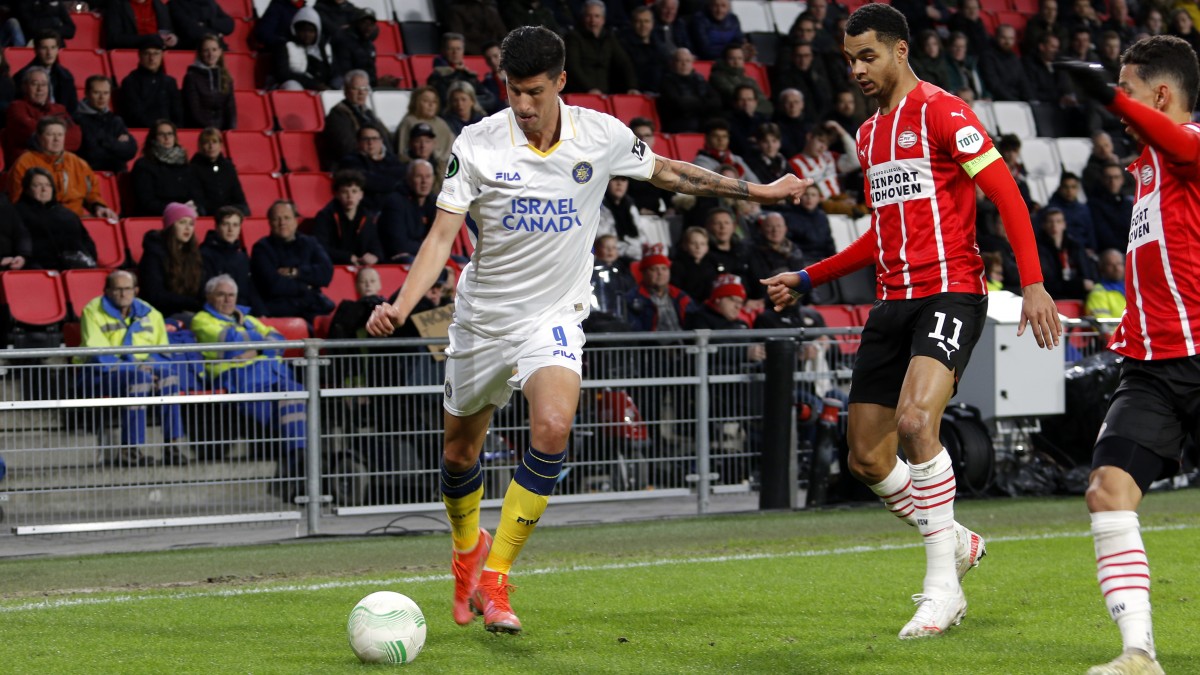 PSV continued to look dangerous as Madueke fired a shot from inside the box that hit the side netting on 53. Krstajic made his first substitutions in the 62nd minute as Sheran Yeini replaced Shamir in the middle of pitch while Brandley Kuwas replaced Djordje Jovanovic.

Kuwas’ introduction revived Maccabi play when the Curacao international burst into the box in the 69th minute but saw his initial effort blocked before his attempted cross was caught by the keeper. Zahavi fired a shot that went through Peretz’s goal in the 72nd minute. The Maccabi coach made another double change a minute later when Glazer and Biton retired and were replaced by Eyal Golasa and Tal Ben Chaim. 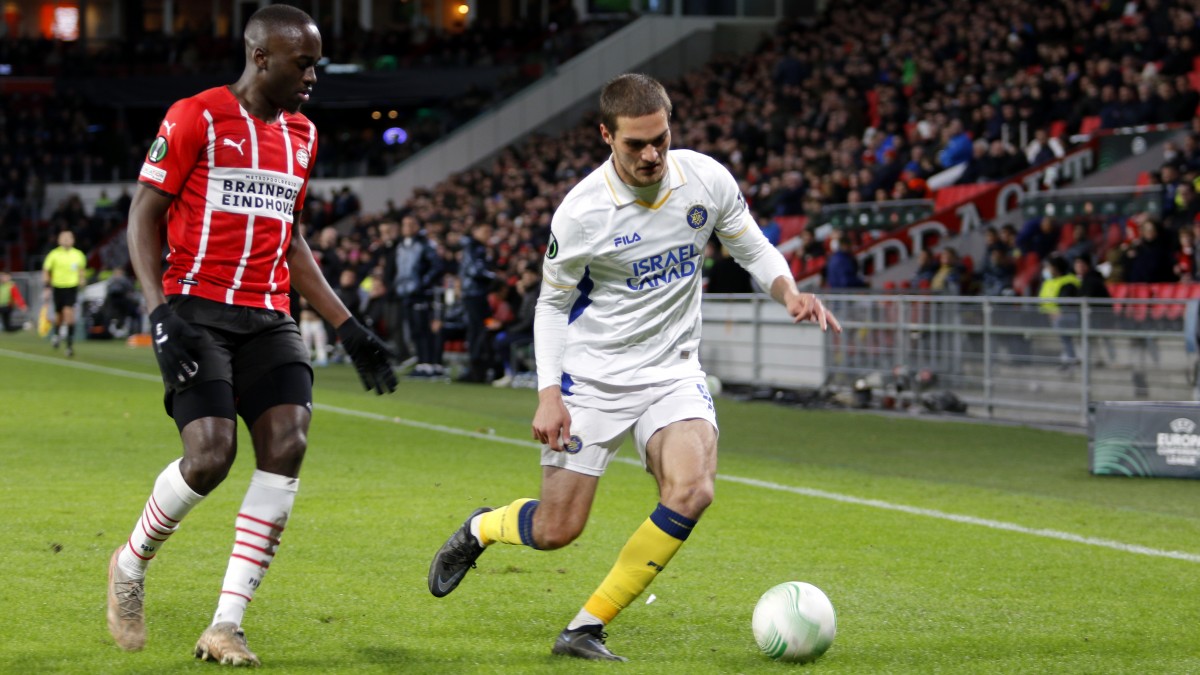 In the 82nd minute, Matan Baltaxa burst into the box and was brought down by a PSV defender, but his requests for a penalty were dismissed by the referee. Ofir Davidzada was introduced for Baltaxa on 87 replaced Baltaxa as the left-back picked up an injury in the closing stages.

Just before the fourth referee indicated three minutes of added time, PSV went close as a cross went through Peretz’s goal, but luckily they couldn’t find anyone capable of driving the ball home.