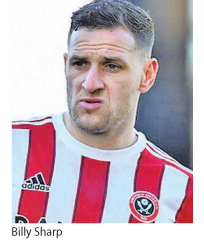 Police have arrested a man after Sheffield United captain Billy Sharp was assaulted by a fan at the end of the second leg of the Championship play-off final at Nottingham Forest.

Television footage showed a supporter charging at Sharp during a pitch invasion as the player stood on the sidelines.

Forest won 3-2 on penalties after the two legs ended 3-3 on aggregate.

“We saw one of our players attacked,” Heckingbottom said after the game at Forest’s City Ground. “He is shaken, bleeding, angry.

“Bill was minding his own business off the pitch, trying to keep our players away. He was blind, it was loose. He was knocked to the ground [and required] stitches, he was shaken.

Nottinghamshire Police have launched an investigation following the incident.

Chief Inspector Paul Hennessy, Nottinghamshire Police, said: ‘A 31-year-old man has been arrested on suspicion of assault in connection with this incident. He remains in custody and will be questioned by officers.

“Our investigations into the circumstances surrounding the incident are ongoing. We have spoken to the player concerned and we are working with the two clubs who are supporting us in our investigation.”

In a statement, Forest said the offending fan would be banned for life.

They said: “Nottingham Forest Football Club are appalled to learn that our former player, Billy Sharp, was assaulted while leaving the pitch after tonight’s game at the City Ground.

“The club will work with the authorities to locate the individual so that he is held accountable for his actions, which will include a lifetime ban from Nottingham Forest.

“The club would also like to personally apologize to Billy and Sheffield United Football Club.”

After the game, Heckingbottom told Sky Sports: “How can you come to your place of work and mind your own business and be attacked in that way. It’s out of order and all that’s wrong.

“You hear too often that people condemn it, but nothing is done and it is we who suffer. This is upsetting for many reasons, but it will be dealt with.

In January, Britain’s football police chief told the BBC that arrests at football matches in England’s top five leagues were at their highest level in years, with fan disorder “worsening”. (BBC sports)