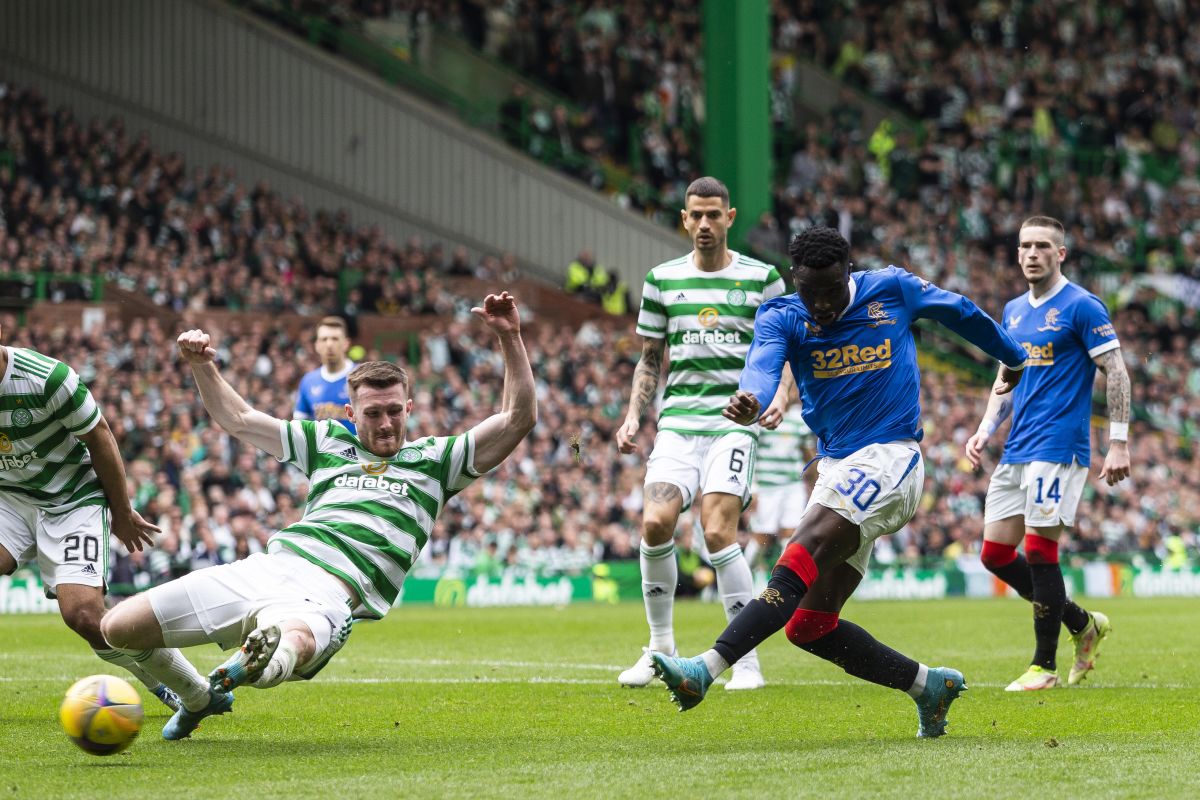 RANGERS performed well in this afternoon’s Old Firm game at Parkhead, and will consider themselves unlucky not to have gone through Glasgow with the three points.

Fashion Jr’s second-half goal canceled out Jota’s opener, and Gers had their chances for what would have been a deserved win.

Manager Gio van Bronckhorst has named three changes to his side. From the side that faced RB Leipzig in the UEFA Europa League semi-final first leg on Thursday came Steven Davis, Scott Arfield and Fashion Jr in place of Glen Kamara, Ryan Jack and Scott Wright.

That meant it was a back five from Allan McGregor in goal with James Tavernier, Connor Goldson, Calvin Bassey and Borna Barisic ahead of him.

Davis and Arfield joined Lundstram in the middle of the park, with Ryan Kent and Joe Aribo partnering Fashion Jr on offense.

It was the Gers who started the match with most of the possession, showing great aggression but controlled in their game.

The first big chance of the match then fell on the visitors in the 13th minute. From deep on the right, Tavernier delivered an exceptional ball into the box, and beating Cameron Carter-Vickers, Kent launched an effort towards goal, but unfortunately for Gers, it slipped just wide.

Kent then had a low drive from 25 yards which Hart did well to hold onto, before against the run of play Celtic took the lead.

Daizen Maeda broke into the area on the left and chipped a ball into the goal which was returned home by Jota at the back post.

Jota had another effort for the home side – a diving header from Jota that sailed over the bar, while Maeda should have done two, picking one up over the bar when Rangers were caught trying to play from behind.

Early in the second half Carter-Vickers sliced ​​a Barisic cross wide for a corner, and from the resulting corner Gers could have been level.

Fashion Jr’s initial effort was potentially blocked by Matt O’Riley’s hand, and the loose ball fell for Goldson to explode 12 yards out.

Fashion Jr then headed another corner from Tavernier at the far post with the visitors well in control early in the second half.

Hatate missed a sweet golden chance for Celtic, exploding well just inside the area when fed by Furuhashi, while Davis failed to connect as he would have liked on a ball from Tavernier at him at the edge of the box, while he also shot.

Then in the 68th minute, Rangers grabbed the equalizer their game deserved.

A nice one-touch passing move brought Kent and Fashion Jr to the edge of the box, and Kent managed to put Fashion Jr to his left for the shot. From there, the Zambian got a yard on his man and drilled a fearsome drive past Hart and into the back of the net.

Hart had to deny Fashion Jr minutes later as he showed super strength to get away from Carter-Vickers for a shot, and from the corner he headed for Tavernier’s ball.

Hart then denied Arfield on the end of a Scott Wright cross, and the rebound dropped for Ryan Jack to shoot straight at the Celtic keeper.

Fashion Jr then went one-on-one with Hart, and from the angle he beat the goalkeeper, but agonizingly the ball came back from inside the post and somehow another, the home team survived.

Tavernier headed in a late cross from Barisic, and it was 1-1 to finish, with Rangers certainly feeling aggrieved for not taking the three points.

All eyes now turn to Thursday and the club’s biggest game of the modern era as RB Leipzig arrive in Glasgow with a UEFA Europa League place on the line.