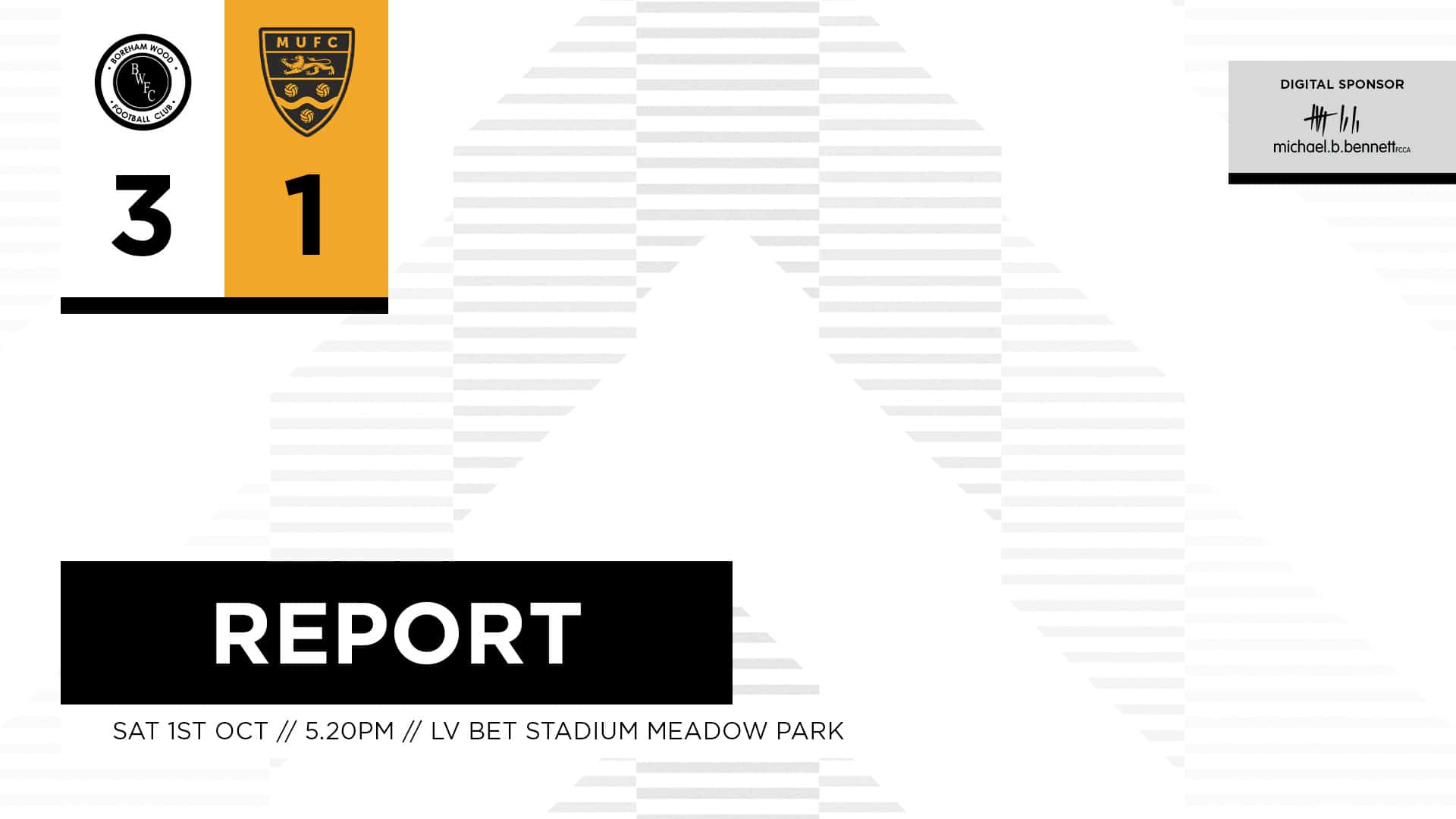 WOOD COMES FROM THE BACK TO WIN

George Broadbent scored his full debut with a goal as the Wood ran out the 3-1 winners over newly-promoted Maidstone United, with BT Sport cameras there to capture it.

Maidstone took the lead midway through the first half after Roarie Deacon’s strike from the edge of the box deflected David Stephens but their lead lasted just six minutes as George Williams’ cross from the flank right flew all the way.

The Wood continued to dominate possession in the second half and finally made it count, as Broadbent ran into Dennon Lewis’ cross to put them ahead with his first goal for the club just after the hour mark , minutes before Ndlovu added a third on his return from injury.

It went from bad to worse for Maidstone as Christie Pattisson was sent off for an early swim after receiving a late red for a foul just outside the box.

The win leaves Wood fourth in the National League standings, and they face a short break before facing Bromley on Tuesday night.

Broadbent started for the first time after coming off the bench on his debut in last week’s draw with Yeovil Town, while Ndlovu returned to the starting XI after recovering from his knock, and the latter in particular impressed from the start.

He showed good strength and speed to pass Gavin Hoyte on the left side before sliding into Tyrone Marsh, whose effort was deflected into Tom Hadler’s path five minutes later.

The hosts certainly had the best of them and attacked with intention, but were unable to produce clear openings shortly before the visitors had their first game chance.

Maidstone produced a golden chance soon after, as Jack Payne was overshot by Sam Corne, allowing the ball to fall perfectly into Christie Pattisson’s path with a clear view of goal, but the winger dragged his effort inches from the post.

Wood immediately fought back and further pressure came on the other end as the game began to come to life. Broadbent was taken out on the edge of the box with substitute Williams recovering the loose ball, delivering a perfect one-inch cross that Ndlovu headed over the crossbar via deflection.

The following corner met Will Evans’ header which powered his effort towards goal, but George Fowler was well placed to clear it off the line.

It was the visitors who opened the scoring against the run of play in fortuitous fashion, as Deacon’s effort came out of Stephens to off-foot Nathan Ashmore and find the bottom corner.

Unfortunately for the Stones, they were pushed back a few minutes later as Hadler was caught in no man’s land, with Williams’ cross beating the goalkeeper with help from the woodwork.

With the score tied again, the game remained even for the remainder of the half as Jack Payne trailed an effort wide moments before Regan Booty fired a free kick over the crossbar.

Maidstone would be denied by excellent Payne defending late, sending both teams into the break level.

The Wood nearly took an instant lead after blasting the ball for the second half, as Zak Brunt sent a nice ball to Ndlovu, but his touch was too heavy for Hadler to collect.

Similar to the first half, the hosts headed possession without carving out a clear chance, although they passed very close shortly before the hour mark. gap down the left flank and burst into the box, squared it up for Broadbent who was unable to sustain his effort under pressure.

The combination of Lewis and Broadbent soon paid off, however, and the loanee from Sheffield United soon had his moment. Lewis played a wonderful cross into the danger zone where Broadbent was waiting to lead the wood in front.

It got even better moments later as Zak Brunt played a fabulous through ball to Ndlovu who tapped the ball past Hadler to extend Wood’s lead.

The Woods took the lead and kept their opponents from picking up the pace, dropping close to a fourth with just under 15 minutes remaining. Three chances in quick succession saw substitute Danny Newton twice denied, before Brunt’s follow-up was deflected for a corner.

As if it couldn’t get much worse for the Stones, they were reduced to ten men when Pattisson saw red in stoppage time, and Josh Rees thought he had added a fourth when he moved past Hadler moments later, but the assistant’s flag was raised. to ensure it was just the three goals as the Wood secured all three points with a second home win of the season.

OUR CLUB. OUR CITY. OUR COMMUNITY