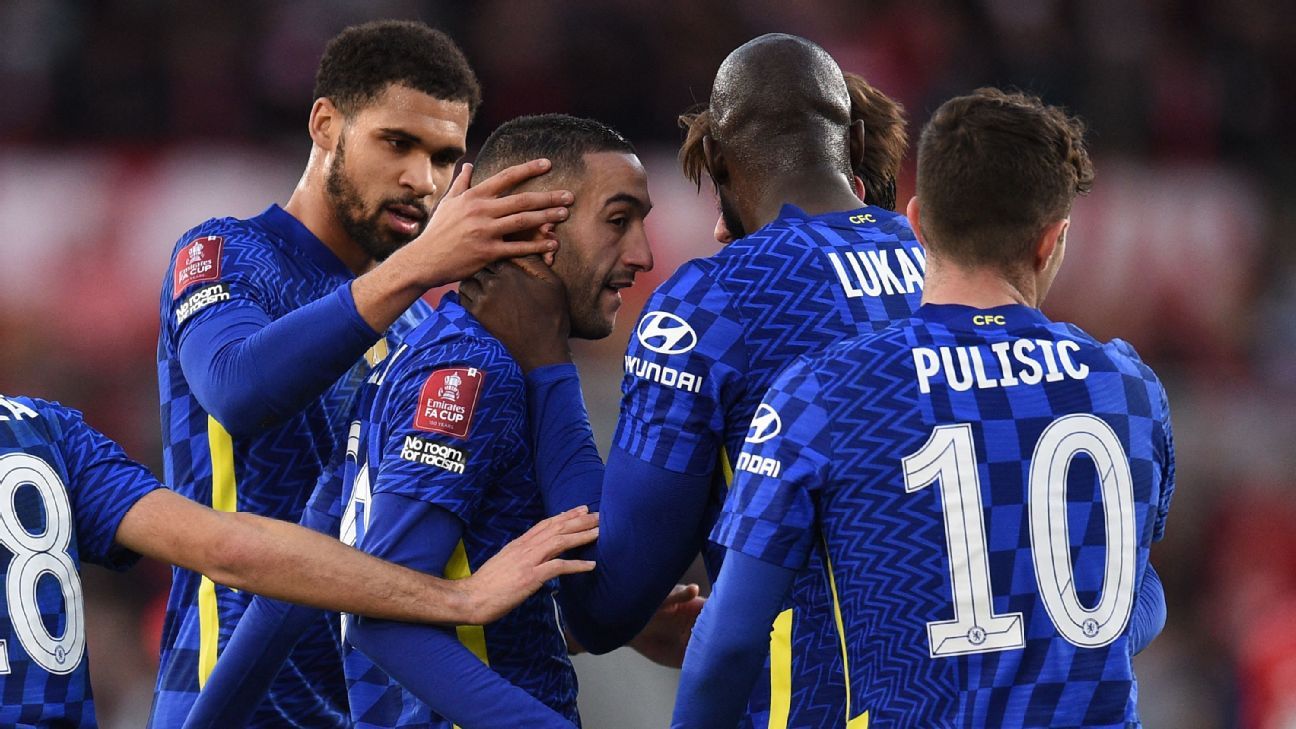 Chelsea cruised to a 2-0 victory over Middlesbrough in the FA Cup quarter-finals on Saturday, ending the Championship side’s remarkable run in the competition.

Middlesbrough beat Manchester United on penalties in the fourth round and scored a winner in extra time to beat Tottenham Hotspur in the fifth round, but Chris Wilder’s side came unstuck against Chelsea on Saturday.

Romelu Lukaku tapped into an empty net in the 15th minute to help Chelsea take an early lead before Hakim Ziyech doubled their advantage with a superb finish from the edge of the penalty area.


Middlesbrough received raucous support inside the Riverside Stadium but never really seemed able to trouble the visitors who were still in control.

Chelsea, which is the subject of several offers to buy the club, operates under a special license from the British government after Russian owner Roman Abramovich was sanctioned following Russia’s invasion of Ukraine.

Only a few hundred Chelsea fans were inside the stadium – a consequence of restrictions on ticket sales – but they could at least celebrate their side reaching the semi-finals for the fifth time in six seasons.

Since Abramovich announced he was putting the European champions up for sale on March 2 after 19 trophy-laden years, business has been business as usual on the pitch.

They have won all six matches since, with the latest victory coming the day after a deadline for offers to buy the club.

Despite the distractions, manager Thomas Tuchel remained focused on winning games, and his players’ performance on Saturday was clinical.

“We were very focused and very serious. We showed quality in the decisive moments,” said the German.

“The effort was huge and we never let them get a foot in the door after the first two goals. It was a deserved win.”

“Nothing we can do will change the situation and we accept that it’s not in our hands, but what is in our hands is leading by example and staying focused.”

Chelsea had drawn criticism midweek for demanding the game be played without fans to ensure “sporting integrity” given they could not sell tickets.

They later withdrew that request and the Riverside swung before kickoff.

But when Mount was cleared forward down the left and then kicked in a slide rule cross to allow Lukaku to tap home, the odds still looked stacked against Middlesbrough.

When Ziyech’s shot then flew past Middlesbrough goalkeeper Joe Lumley, the hosts had a mountain to climb.

Chelsea could have added to their lead with Lukaku denied by a goal clearance and Lumley doing well to deny Timo Werner’s late effort, while the hosts rarely had a chance.

It was Middlesbrough’s first home defeat in 10 games in all competitions, and their focus will now shift back to trying to make the promotion play-offs.

For Chelsea, they are still chasing silverware on two fronts after reaching the Champions League quarter-finals in midweek.

“We really have that winning mentality within the group. Any competition, any game, we want to win and we want that to continue,” Mount said. “It’s been a tough couple of weeks, but for us as a team we’re just focused and ready to play.”