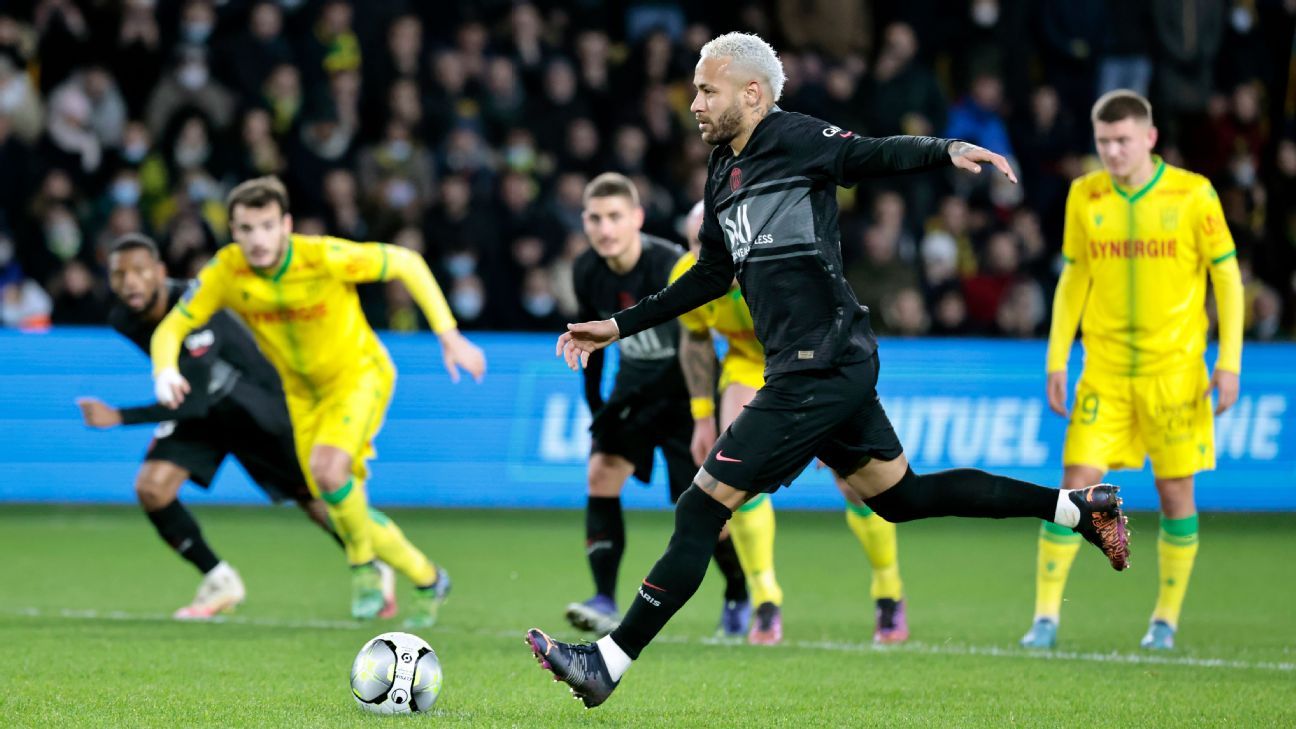 Nantes took a three-goal lead at half-time, then used their chance to win 3-1 at home on Saturday and handed runaway leaders Paris Saint-Germain their second Ligue 1 defeat of the season.

Nantes saw little possession, had a player sent off only to see the red card overturned in the VAR review, then saw Neymar squander a penalty in a one-minute clash at the Stade de la Beaujoire.

But they came away with a full haul of points in a surprise upset for star-studded PSG.

Randal Kolo Muani put Nantes ahead in four minutes after a searing run down the left wing of Moses Simon, and they were 2-0 up around 12 minutes later when teenager Quentin Merlin scored his first goal for his home club with a raspy left foot. shoot.

Nantes defender Dennis Appiah was sent off two minutes before the break for tripping Kylian Mbappe as he headed for goal. But the referee was asked to review his decision by VAR and changed it to a yellow card when replays showed the clash was not as cynical as expected.

VAR then intervened again in stoppage time before the break when Georginio Wijnaldum handled the ball in his own penalty area, kicking Nantes which Ludovic Blas converted for a stunning half-time lead.

PSG, who started the game 13 points clear of second-placed Olympique Marseille, pulled back a goal a minute into the second half as Lionel Messi set Neymar up for a clinical finish.

The Brazilian, back in the starting line-up for the first time since November, then had a chance to reduce the deficit further when Appiah brought down Mbappe again, but Neymar’s penalty was a weak effort directly on Alban Lafont.

Mbappe then produced an uncharacteristic miss from close range in the final 20 minutes as PSG kept up the pressure but were unable to capitalize on their many chances.

The win saw Nantes slip from 10th to fifth in the Ligue 1 table as they battle for a place in next season’s European club competition.

Earlier on Saturday, Olympique Lyonnais came from within a goal to hold hosts Racing Lens to a 1-1 draw as striker Tino Kadewere scored his first goal since March.

Lens took a 13th-minute lead through Jonathan Clauss and put the ball in the net again in the 37th minute, but Seko Fofana’s effort was ruled out after a VAR check. Kadewere’s equalizer came at halftime.