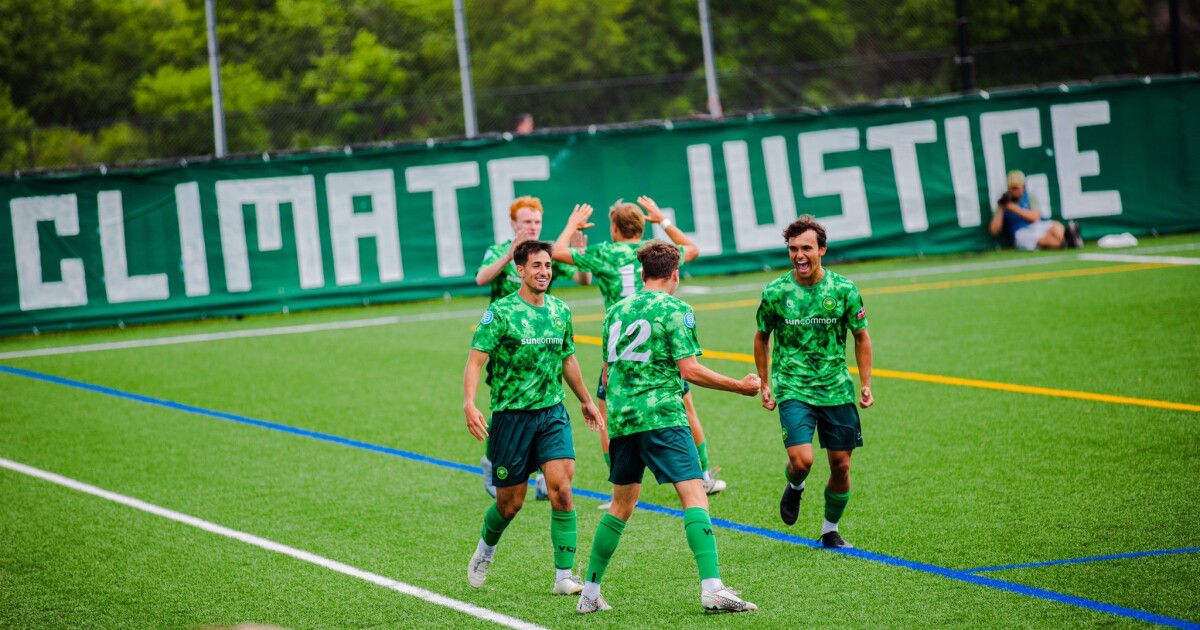 Vermont’s newest sports league has two missions: go green and connect with some of the state’s newest residents.

Keil Corey is the co-founder of Vermont Green Football Club. And just to be clear, he’s talking about football like in what they call football abroad.

VPR’s Mitch Wertlieb spoke with Keil Corey. Their conversation below has been edited and condensed for clarity.

Keil Corey: We talk about football, but the global community calls it football. So we talk football. And that’s what we’re here to do in Vermont is play football – play the beautiful game.

Mitch Wertlieb: And how did this all start with the Vermont Green Football Club? How long have you been there?

This is our very first season. So we started this month. And the team itself has been a work, a labor of love for about two years. We started with the idea around the start of the pandemic.

My good friend, Matt Wolff, who is a co-founder, reached out to me with the idea of ​​starting a soccer club in Vermont that focused on environmental justice. And the global game is such a big and powerful platform. And it wasn’t being used to push action on the huge issues we face, whether it’s climate change or systemic racism. So he contacted me with just this idea. And we’ve been working on it ever since.

How do you make your league, as you call it, green?

We do this in several different ways. So the first is really getting our own house in order – managing our own carbon footprint, with our own waste footprint. And then another big chunk of our operations is all of the merchandise that we sell, all of our clothing. Our kits. And the kit is just your shirt, your shorts, what the players wear on the pitch.

And we’ve done a lot of research work, to find the right vendors who are doing some very impressive and forward-thinking things to make clothes that are more environmentally sustainable and also socially responsible.

The other thing that seems very interesting about this league is that it seems to foster a sense of community and provide a real sense of belonging to new Americans, people who may be new to Vermont and people other countries. What can you tell us about this effort?

Football is such a wonderful and powerful way to connect with people who you may share nothing else with except your love for the game. So we started conversations with Juba Stars FC, which is a local football organization. They have a men’s league team, they also do youth club programming. And everything is free. And it’s run by volunteers. And they have been doing this job for about 15.16 years. And that came from a need in the Somali Bantu community in particular, to help young immigrants and former refugees have a place to grow, to be safe, to be supported. And to progress, whether they want to, you know, be a professional football player or just continue to play college football, or play at the highest level possible.

And we also have local players on our roster who have played in these Juba Star teams, who come from former refugee and immigrant communities and are now part of our club. So there are a lot of interconnections.

“Football is such a wonderful and powerful way to connect with people who you may not share anything else with other than your love for the game.”

Football, football, whatever you want to call it, it’s such a global game. It’s the kind of thing where if you’re nervous about meeting new people, you can jump in and say, “Hey, we all love football.

This piece is so powerful. I had this experience now in Brazil, Central America, where I didn’t know the language, but I brought a soccer ball with me, and you are immediate friends, you don’t need to know each other . You don’t have to speak the same language, you speak football, you put the ball down. And before you know it, you’re playing a game with people, having fun.

And it’s just that you connect on that level in a way that really doesn’t happen anywhere else that I’ve ever found in my life. So we like that aspect. And that clearly shows in the way we are building this club in this state.

So now seems like a good time to talk about this new pilot program with King Street Center. What does it mean? King Street Center is a non-profit organization that works with young people in Burlington, and how does the Vermont Green Football Club get involved with them?

We wanted to figure out how to make our games more inclusive and inviting for new Americans, for historically underrepresented and marginalized communities in Vermont. And King Street did that, and so they help us learn how to build those relationships.

If you look from outside the state, it’s easy to think that Vermont isn’t very culturally diverse. And that’s true to some extent, but it’s really not true. When you’re actually on the ground and meeting all the people who live in Vermont, you realize there’s a lot more to this story here.

And the hope is that our players are going to have such a complete experience and get a really deep sense of what it’s like to live in Burlington and live in Vermont, that they’ll want to come back.

How many teams do you have in Vermont Green Football Club right now, how much attendance is there and how long is the season?

Well, regarding our division itself, there are seven other teams. The players registered in our team are currently more than 30 players. We’re going to have our next home game – in fact the one I’m really excited for is next weekend. We play Seacoast, which comes out in New Hampshire, this Saturday, June 4 at 6 p.m., at field of virtueand doors open at 5 p.m. We really encourage people to get there ahead of time to enjoy, just enjoy the atmosphere, eat, drink, you know, meet people, have fun together, and then get really excited for the game.

And we still have six games after that throughout the season. We’ve also been very strong so far in our first three games, we’ve come out, we’ve won 4-0 against Boston. We actually went to Seacoast and lost 1-0 on a really disgusting day. It was like 95 degrees, cramps were a problem. It was hard. And we just played our first home game against Black Rock and we beat them 4-1.

So the players are really good. Kudos to the coaching staff, the recruiting has been amazing. And the guys really come together in a way that blows my expectations away. And then we go into this New Hampshire game with an away loss. They come to our land. We’re going to have such an environment next Saturday, and I hope people will come out and support us and help us win against our New Hampshire rivals.

Do you have questions, comments or advice? Send us a message or tweet morning edition host Mitch Wertlieb @mwertlieb.