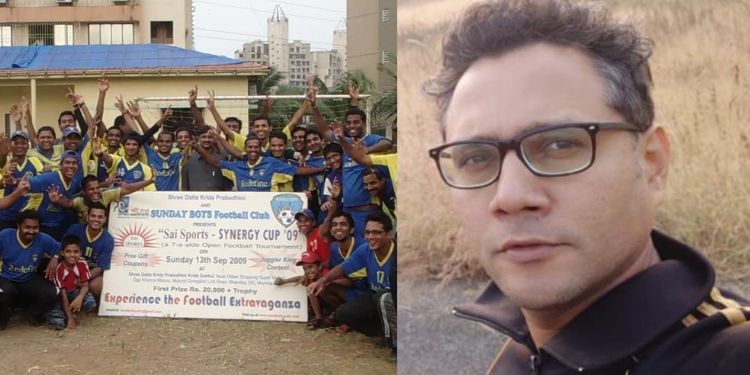 A group of young football enthusiasts never thought that one day they would form and lead a football club. The team was founded in 1997 in Bhandup, a suburb of Mumbai. They started playing football on Sundays, and this weekend affair took the form of a club aptly named “Sunday Boys Football Club”.

Padmaraj Krishnankutty (Paddy), a key member of the club, is an investment director at Mindshare. He started his media journey with Overture Communications, then joined Carat Media, then Mediacom and is now at Mindshare, part of GroupM.

Krishnankutty’s love for football started early. He was in 8th standard when professional training at school helped his team reach the district level final of a Mumbai District Football Association (MDFA) tournament. The passion continued in college with many football clubs coming to play in the locality. Great stalwarts used to rub shoulders with them on this pitch, he recalled, in a conversation with MediaNews4u.com.

It was their main trainer and mentor, Francis Hendrick, head coach of the Central Railway Mumbai division, who urged the group to have a regular training schedule. So the self-funded Sunday Boys Football Club was started with about 16 or 17 members and was officially registered.

The club started playing in private tournaments in Mumbai and its suburbs. To develop football in their locality, the club started coaching at St Xavier’s High School, Bhandup. Most St Xavier players still play for the club. Some of the students from this school today play for various clubs in the ‘Elite’ and ‘Super’ divisions of MDFA.

The official Sunday Boys Football Club website ww.sundayboysfc.com was launched on May 1, 2007 – a first for a football club in Mumbai, we assume. The site also manages the MDFA League rankings.

Between 1997 and 2006, the club won many tournaments. Some of the players represented Mumbai Football League teams. The club also ran and organized successful private football tournaments in Bhandup in 2002 and 2003. This was probably a milestone, Krishnankutty recounts, with national and international players taking part in a football tournament in the suburbs.

It was not until 2006 that the coach and senior team members decided to register the club with the MDFA, with the intention of playing in the Mumbai Football League Fourth Division. The club advanced from Division 4 to Division 3, 2 and Division 1, where they beat four-time winners Central Bank of India 4-1 in the final.

At Mindshare work, it was not just Krishsankutty but a host of others who loved the beautiful game. Thus began the inter GroupM tournaments and later the corporate tournaments. A torn ligament and groin injuries forced him to rest, but he continued as goalkeeper, before returning to his regular game.

By the time the team reached the “Super Division”, a level above Division 1, Krishnankutty was not playing but leading the team, in order to balance work and play. He admits that even managing work and the team of 20 to 25 players is hard work. Yet the group managed to run the club professionally, despite the lack of adequate funding, ensuring that every player was paid. The club’s expenditure has reached Rs.7-8 lakh per year.

Passion competes for time not only with work, but also with family. The publicist and footballer was looking for a pitch for a tournament when he received a call from his wife. He texted “I’ll call back.” Upon returning home, he realized that she was already admitted and rushed to the hospital. He managed to achieve this before the birth of his son, but regrets having missed these crucial moments with his wife.

In the years to come, Covid was a setback and to add to their woes, the Club’s hard earned money (Rs.12 to 13 lakh) was lost in the PMC Bank scam.

During Covid they even planned to close shop, but the parents insisted on continuing the coaching. A Whatsapp group was formed under the leadership of Sudarshan Shetty and Amrit Raj and online workout/fitness sessions were held for the children.

After confinement, the children were back on earth with flying colors. Strength changed from 100 to 40/50. The ranking level has also changed from “Super Division” to “Division 1”. The money lost to the bank scam didn’t help.

Krishnankutty remarks: “Covid didn’t matter much, but the drop from Super Division level to Division 1 was more painful. Climbing the ladder is easy but maintaining it and the fear of falling is difficult.

The club is now bouncing back under Amrit Raj with Kailash Nishad, Sanjay Shetty, Ganesh Shetty and post Covid Vijesh. Ajit Raj promises to step up training and bring the team back to super division.

On a personal level, Krishnankutty remembers his coach’s words: “’was a player’ is in the past tense, talk about it now; what you did never matters, what you are now matters.

Now over 40, Krishnankutty has played five to six matches in the veterans category. Sunday Boys FC even have players aged 50, 56 and 62. Mr Selvaraj, 62, is still fit and can play 20 minutes on the floor, he notes. Their dream is to be on the pitch until it’s possible and to stay fit.

Experienced and certified professionals provide year-round guidance for boys and girls of all age groups at the Club. The girls’ team and the underprivileged benefit from free coaching. Student development is monitored through regular performance tests. Nutrition counseling and classroom sessions are part of the training.

The media buying professional says his wife Saritha, who is in biostats, has been very supportive of his passion beyond work, as has his mother, a ball thrower during her school days . The latter even helped with brochures during the early days of the Club.

Things have not returned to normal in terms of funding and management, but the show continues, driven by a passion for the game shared by management and players. It’s a passion that will never end.