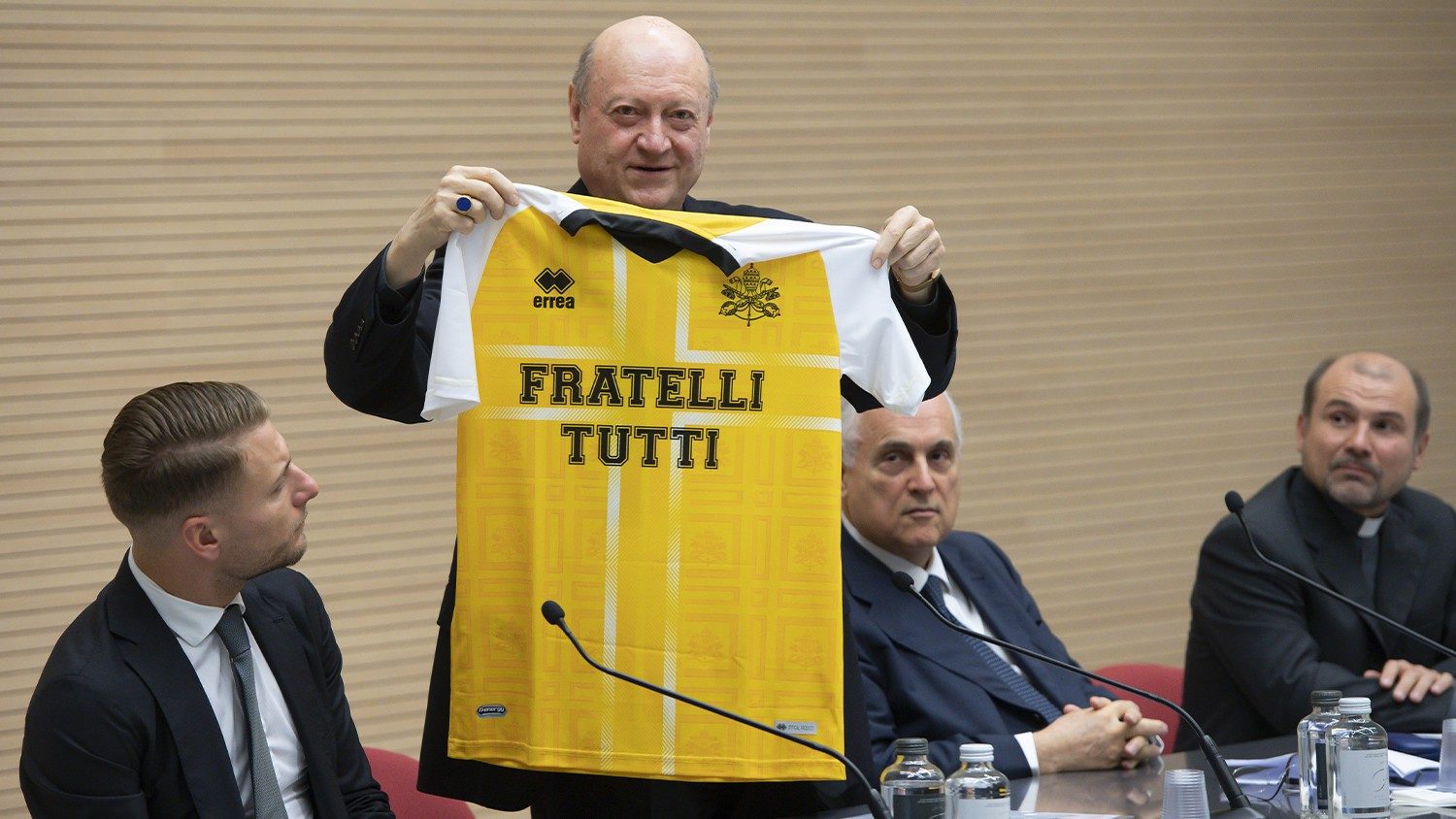 Pope and Roma teams in football match against exclusion

The World Roma Organization team and the â€œPope’s Team – Fratelli tuttiâ€ will play a â€œfraternalâ€ football match on Sunday 21 November at the training ground of the Italian football club, Lazio.

At the initiative of Pope Francis, representatives of the World Roma Organization and the “Pope’s Team – Fratelli tutti” will play a fraternal football match, much more than friendly, according to the Pontifical Council for Culture of the Vatican . The dicastery presented Fratelli Tutti’s match to journalists at a press conference at the Vatican on Tuesday.

The Fratelli tutti football match will be played on 21 November at 2:30 p.m. at the training ground of Italian football club Lazio in Formello, some 25 kilometers north of Rome.

On this occasion, funds will be collected to support the project â€œA kick against exclusionâ€, promoted by the diocese of the Pope of Rome to encourage the inclusion of Roma and other most vulnerable people.

Football has cultural and ethical value, not just social, Cardinal Gianfranco Ravasi, president of the Pontifical Council for Culture of the Vatican, said Tuesday at Tuesday’s press conference to present the sporting event.

He explained that Pope Francis has entrusted the initiative to the Pontifical Council and to Athletica Vaticana, the Vatican sports association. From the very beginning, he said, sport has represented something anthropologically fundamental. Through its creativity and freedom, sport has always been closely linked to culture. In classical Greek culture, sport was linked with literature, poetry, drama, and myth.

Other present at the press conference were Auxiliary Bishop Benoni Ambarus of Rome, Claudio Lotito, president of the football club Lazio and Ciro Immobile, captain of the Lazio team. Representatives of the World Roma Organization were linked by video conference from its headquarters in Zagreb, Croatia, with the Apostolic Nuncio to Croatia, Archbishop Giorgio Lingua.

Pope Francis will receive the two teams in audience on Saturday, November 20, during which he will be presented with the jersey of the No.1 team Fratelli Tutti.

The â€œPope’s Team – Fratelli Tuttiâ€ is made up of Swiss guards, Vatican employees, children of Vatican employees, priests who serve in the Secretariat of State, the Roman Curia and the Pontifical ecclesiastical academy. To testify to the concrete commitment to inclusion and the very meaning of the match, three young migrants, welcomed by the Community of Sant’Egidio, and a young person with Down’s syndrome who participates in the Special Olympics events, will play for the Pope’s team. .

Against racism and discrimination

In a statement released earlier, the Pontifical Council said the Pope had accepted the World Roma Organization’s proposal to host a football match to revive the commitment against racism and discrimination.

The Council recalled in particular a particular gesture of inclusion by the Pope during his visit to Slovakia in September. On September 14, he visited the district of LunÃ­k IX in the eastern town of KoÅ¡ice, which has the highest density of Roma in Slovakia. Basic services such as gas, running water, sewage system, electricity and heating are scarce in dilapidated and overcrowded buildings.

Speaking on behalf of the Roma people, the Holy Father called to move â€œfrom prejudices to dialogue, from closures to integrationâ€. After listening to the stories of Roma men and women about their pain, their redemption and their hope, he said that to be Church is â€œto live as a people called by God, each with their particular role to play, all as members of the same team. â€These words apply perfectly to the meaning of a friendly football match.

The Pope deplored that too often the Roma have been “the object of prejudices and merciless judgments, of discriminatory stereotypes, of defamatory words and gestures”. “Consequently, we are all poorer, poorer in humanity”.

The efforts of the World Roma Organization

Pope Francis’ instructions on educating young people are at the heart of the inclusive sport experience offered by the World Roma Organization. Children and young people are involved in a method aimed at preventing all forms of marginalization, with particular emphasis on minorities and people with disabilities. In 2017, the UEFA Foundation for Children recognized and encouraged this education system on football pitches.

Game Week: what you need to know for Saturday’s football game