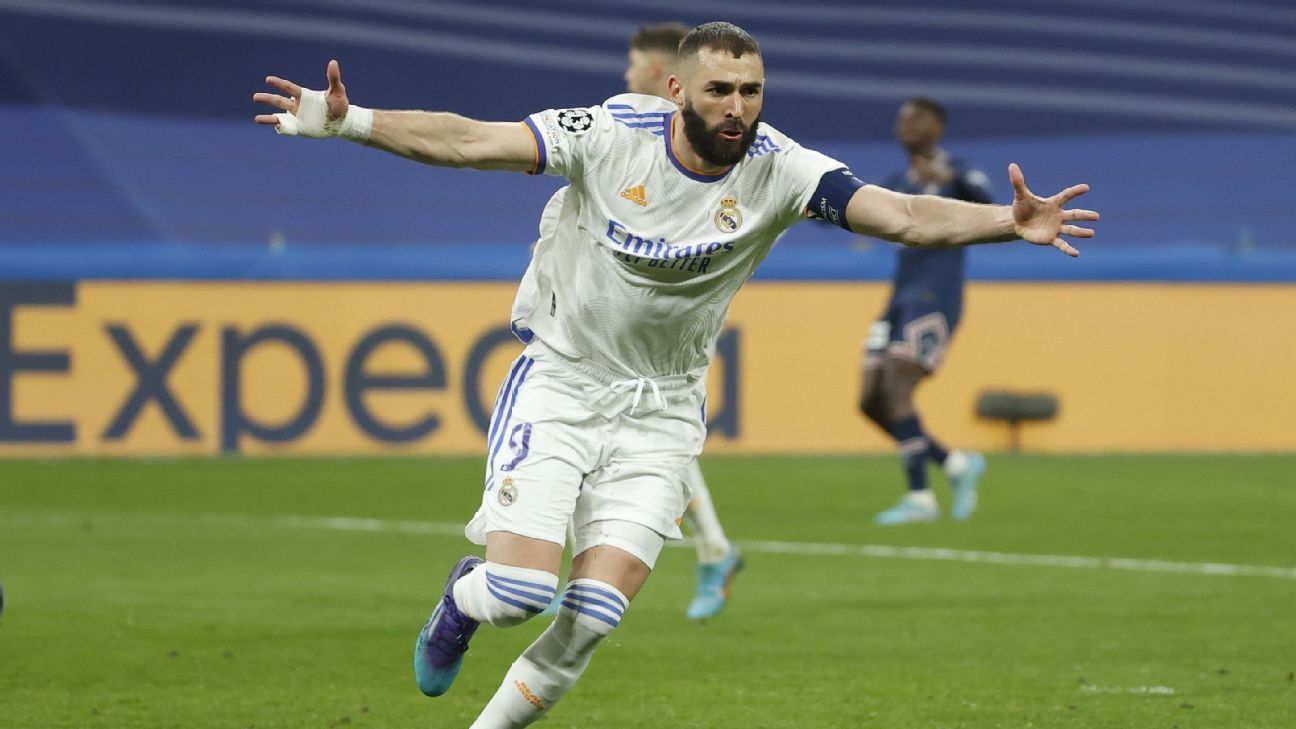 Kylian Mbappe’s first-half strike put PSG in control with a 2-0 aggregate lead, but Benzema netted three after the break as Madrid cruised to a 3-2 victory.

The result continues PSG’s Champions League heartbreak as they suffered another collapse from a winning position after losing to Barcelona and Manchester United in recent years.


Madrid join Liverpool, Bayern Munich and Manchester City in the quarter-finals of the competition.

“We wanted to see this stadium as the fans were today, we needed them, the victory is for them; it was very difficult, we pushed until the end and we deserved to pass”, said said Benzema after the game.

“We lost the first leg, we were down 1-0 at half-time, it was a big effort, the fans pushed us to give everything until the end. These are Champions League matches, c “It’s difficult. We know that PSG likes We started well, we had chances, we didn’t take them and they scored on the counterattack, but in the second half we played our game.

“When we press, we can beat any team, it’s about pressing as a team, everyone in their place and with the fans. Every game is a final for us, in the league and in the Champions League. Today today, Real Madrid is alive.”

Both teams started well but it was PSG who took advantage of the first chances and Madrid goalkeeper Thibaut Courtois had to deny Mbappe twice.

After 25 minutes, Gianluigi Donnarumma produced a superb fingertip save from Benzema’s long-range effort.

Less than 10 minutes later, Mbappe thought he had given the visitors the lead on the evening but his goal was disallowed with Nuno Mendes flagged for offside.

Madrid couldn’t stop Mbappe from opening the scoring five minutes later when he beat the offside trap and flicked the ball past Courtois.

Shortly after the break, Mbappe thought he had scored again but his stunning finish was ruled out for offside again.

Just after the hour mark, Benzema capitalized on Donnarumma’s poor error to make it 1-1 on the night.

Vinicius Junior had a great chance to level the scores on aggregate 10 minutes later but fired his shot from close range over the bar.

Benzema made no mistake minutes later to make it 2-2 and seconds later he scored a sensational hat-trick when Madrid punished PSG’s negligence from the kick-off.

The France international scored his 309th goal for Madrid in all competitions, overtaking Alfredo Di Stefano for the third-most in club history.

Despite reaching the semi-finals last season and the 2020 final, PSG are still looking to win the Champions League for the first time in their history.

“It’s a shame that in 2022 there is a goal like this, it was a clear foul by Benzema on the goalkeeper,” Mauricio Pochettino told a press conference. “After such an injustice, the team had a nervous breakdown. It’s a shame.”

Speaking to Movistar after the game, Madrid manager Carlo Ancelotti said: “It’s special especially because we won after a difficult game. It got complicated after Mbappe’s goal. We suffered a lot to recover. the ball. We pressed them, we’ve practiced that in training, then we scored the first goal and the game totally changed, the fans started to believe it more and more, it was spectacular , we are obviously very happy.

“We started well, with energy, then little by little we found it more difficult to press, they use the ball very well, they have quality players, we suffered but it was normal. We took risks, sometimes we left Mbappé one by one and that can complicate your life. We needed the goal. After that, the atmosphere in the stadium changed completely. The last half hour was spectacular.”

“I said you rotate when the team is tired. I took [Toni] Kroos off because he was tired but he contributed. Rodrygo and [Eduardo] Camavinga was cooler, they gave us a boost.”

‘A consequence none of us would want’: Football club in race to create new stands to avoid relegation threat