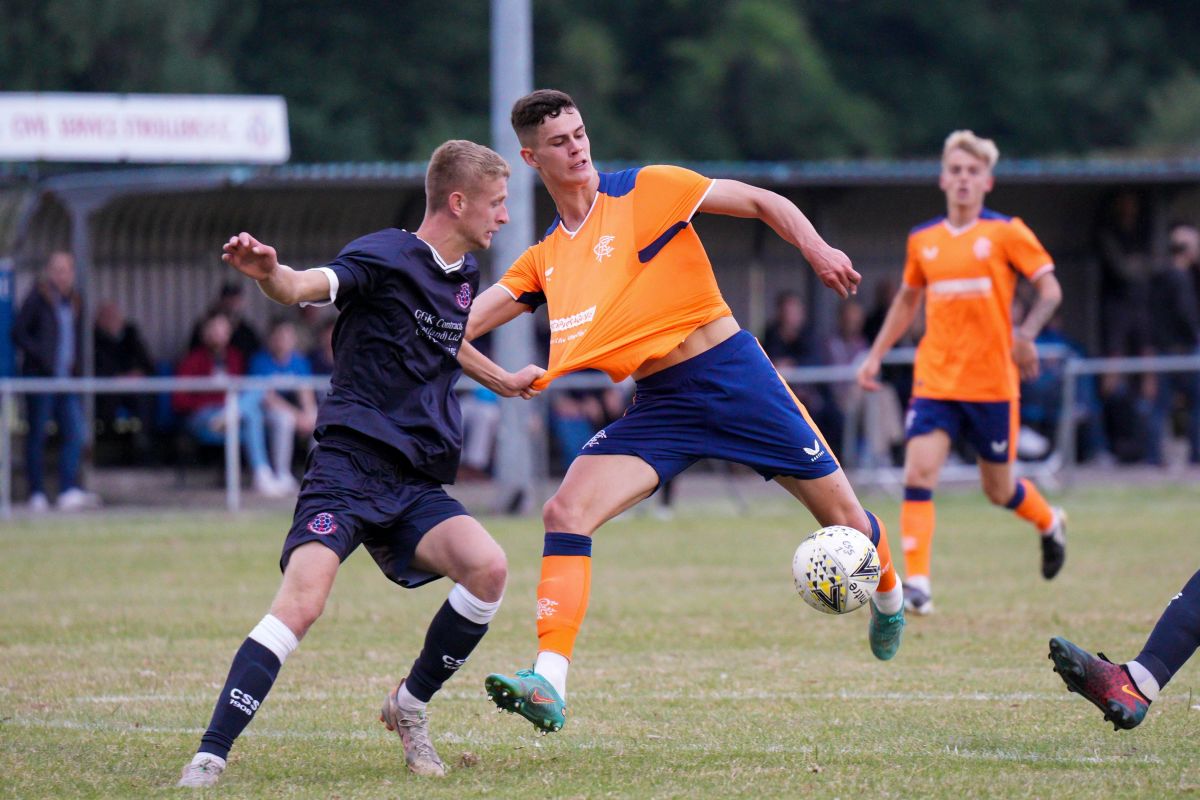 RANGERS B team suffered defeat in their first Lowland League game of the 2022/23 campaign in a 2-1 loss to Civil Service Strollers in Edinburgh.

A Lewis MacKinnon goal early in the first half was not enough for the Light Blues tonight after Euan Valentine netted a brace for the home side in the league opener.

Kane Ritchie-Hosler, Lewis MacKinnon, Connor Allan and Robbie Fraser made up the defensive line with Lewis Budinauckas behind them in goal.

The Light Blues started their first league game with energy and a strong desire to set the tone for the game, but it was the Strollers who got the first chance with just one minute on the clock.

Cole broke the left wing and managed to get away from MacKinnon defending the near post. He picked Kennedy who had found space in the box, but Lindsay was on hand to eliminate early danger.

That first scare had an immediate effect on McCallum’s side as the youngsters looked to react positively and quickly take control of the game. Young linked up well with McCausland in the middle of the park to work their way to Whyte in goal, but the home defense did well to break up that attack.

Both teams continued to battle in all areas of the pitch, with each team providing excellent transition play in the final thirds, but both lines of defense remained firm.

The Gersois maintained this pressure well and were able to open the scoring in the 17th minute. Lindsay sent in a superb delivery into a crowded box after Rangers received a free kick near the halfway line. His effort met MacKinnon at the back post who managed to tap the ball past the keeper to open the scoring for Gers.

The youngsters looked to extend that lead as they continued to create chances in the home side’s penalty area. It was Kane Ritchie-Hosler and Ross McCausland who linked up twice in a row in the 23rd minute with a fine passing game down the right side, but were simply unable to seal their second of the night.

However, shortly before the end of the first half, Jardine’s side found the equalizer to close the deficit. After getting a free kick at the entrance to the Gers penalty area, Euan Valentine sends a curling shot towards the Rangers goal, and Budinauckas fails to block his shot.

Unfortunately, it was the home side who came out on top at half-time after Valentine netted his brace from another free-kick.

As the team headed into the second half, McCallum brought in new signing Zak Lovelace to replace Connor Young.

The Light Blues began to find their rhythm in the second half with excellent build-up play, but the home side’s backline made some important interceptions to defuse the danger.

Robbie Fraser was involved in the 52nd minute when he launched a dangerous free-kick into the home side’s penalty area, but Whyte did well to recover the effort.

Fraser was implicated again 3 minutes later when he put MacKinnon on the edge of the penalty area, but his header effort was again stopped by the keeper.

Strollers threatened the Rangers backline as Cunningham sent a weak effort in front of goal but it fell just wide of the back post.

McCallum made further substitutions in the 70th minute as Graham and Harkness replaced Strachan and Lyall.

In the 74th minute, Robbie Ure nearly leveled the game after a superb header from a Lindsay cross, but his effort deflected horribly.

In the dying moments of the match, the youngster Lovelace sent the ball into the back of the net to secure the equaliser, but the linesman’s flag was painfully raised to end the score line 2-1.