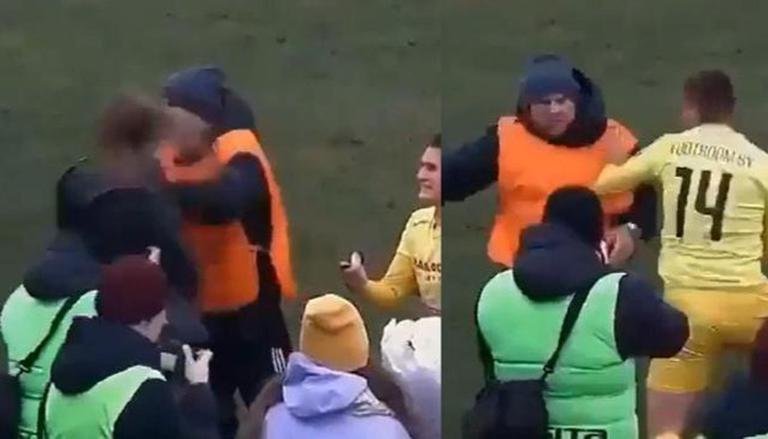 “She Said Yes, Security Said No”: A Proposal During a Football Game Goes Terribly Wrong; LOOK

A hilarious moment happened during a recent football match between Belarusian clubs FC Smorgon and Volna Pinsk as the club’s former defender Vladislav Shubovich had a romantic moment spoiled by security guards. Shubovich attempted to propose to his girlfriend, but it was ruined when a guard came and pushed the woman away assuming she was a fan, who was interfering during the game.

The marriage proposal of a Belarusian footballer is ruined

As seen in the video below, Belarusian footballer Vladislav Shubovich got down on his knees with a ring in his hand to propose to his girlfriend, only to see his girlfriend being pushed aside by a security guard for seconds. later. Following his girlfriend’s push, Shubovich was seen furious at the guard as he confronted him directly before others joined in and calmed the situation down.

Once the matter was settled, Shubovich got back to it by getting down on one knee once more, to propose to his girlfriend. The two hugged and shared a warm embrace as Shubovich’s teammates enjoyed the romantic moment. After the match, Shubovich also used his social media handle and revealed to his fans that his girlfriend said “yes”.

After reading the post, some of the fans gave a hilarious response, writing, “She said yes, but security said no,” highlighting the incident when the perfectly timed proposal went wrong on the first attempt.