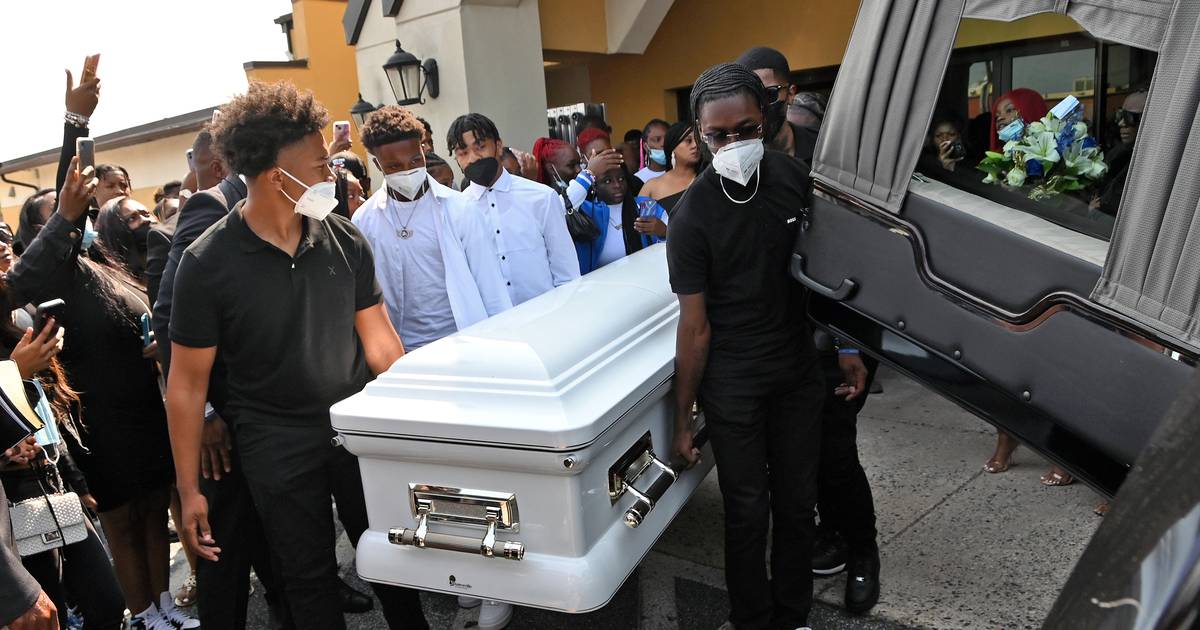 It was not a spirit of mourning but rather a spirit of celebration at the funeral of a Mergenthaler Vocational and Technical High School football player who was fatally shot on campus earlier this month.

The Mervo High junior died on September 2 after he was shot on campus by a student from another school, police said.

Visitors lined up around 10 a.m. to see Brogden in his white, open coffin. He wore his Mervo #30 football jersey and held a football in his right hand. A bouquet of flowers resembling Mervo’s school colors of royal blue and gold adorned the lower half of his coffin.

Some people also wore school colors or wore a Mervo football shirt. People were still showing up an hour later for the service and some stopped to hug and cry with Brogden’s mother, Doretha.

The service started off somberly but quickly turned into applause and cheers as people rose to their feet as Pastor Tyrone Nance Jr. spoke.

People were praying and singing songs during the service. Brogden teachers and Mayor Brandon Scott, an alumnus of Mervo High, gave speeches about Brogden’s life.

“Jerm was a young man, working hard to be the best version of himself,” Scott said. “He wasn’t perfect. None of us are. He knew he was just beginning to scratch the surface of his potential and was dedicated to harnessing everything within him.

Brogden was born on August 7, 2005 in Baltimore. He had a unique eye for style, followed the latest trends, was entertaining and often did amusing imitations of others, according to his obituary.

“Jerm could make anyone laugh, no matter what he may have been through,” the obituary said. “Besides his love of laughter, Jerm also enjoyed eating Alfredo and chicken wings. If he could eat those every day, he would have.

[ Loved ones mourn football player gunned down outside Baltimore’s Mervo High School: ‘He was a bright light’ ]

He started playing football at age eight and found his passion. Brogden was a talented running back at Mervo, where he helped the team win the 2021 Baltimore Junior Varsity Championship from Dunbar High School.

“It was on the football field that he felt most powerful. He could move like a locomotive, earning him the nickname ‘Night Train’,” the obituary reads. “Jeremiah would carry the team on the field When the team needed to gain yards, Jeremiah always received the ball and everything about him came alive.

Less than an hour before a home game scheduled for September 2, Brogden was shot at the time of the dismissal. Baltimore police say a 17-year-old suspect approached Brogden in a parking lot behind the school, began arguing with him, and fired multiple shots.

School police performed CPR on Brogden, who was taken to Johns Hopkins Hospital and pronounced dead a short time later. Authorities have not released the name of the suspect, who faces a first-degree murder charge, or provided information on a motive.

Get the latest news as it happens and find out about other must-see content with our free news alerts.

The shooting marked the tragic end to the first week of school for Baltimore students and spilled over into the second week. On Labor Day, Mervo announced a healing and recovery effort for that week, offering guidance and a phased return to classes. Some city and school district officials have called for more conflict resolution and emotional health in classrooms.

“The seriousness of Jeremiah’s death weighs on me, because of all the promises he made over the years while at Baltimore Collegiate,” said Robert Allen, an educator who knew Brogden from the charter school. “It was a father-son relationship. He confided in me when he felt the teachers weren’t giving him a fair chance to finish his work.

Allen was dean of culture at Baltimore Collegiate School for Boys, a charter school for grades four through eight, when Brogden attended. He said it felt like a roller coaster when he found out Brogden was dead.

“My heart dropped in my stomach,” Allen said, adding that he “lost it” while speaking with Brogden’s mother. “The first thing she said to me, and that’s what broke me. She was like, ‘You did it, you got it this far.’

Brogden’s mother sobbed over her son’s body, surrounded by family and friends before Brogden’s casket was closed ahead of the service. He was later buried in King Memorial Park.

“Jeremiah had a big heart and he loved and supported people who believed in him,” Allen said.

Brogden is survived by his parents Doretha and Ross Brogden; his son Jeremiah Javonni Christian Brogden; siblings Destiny, Isaiah, Nehemiah and her other siblings; and many relatives and friends.