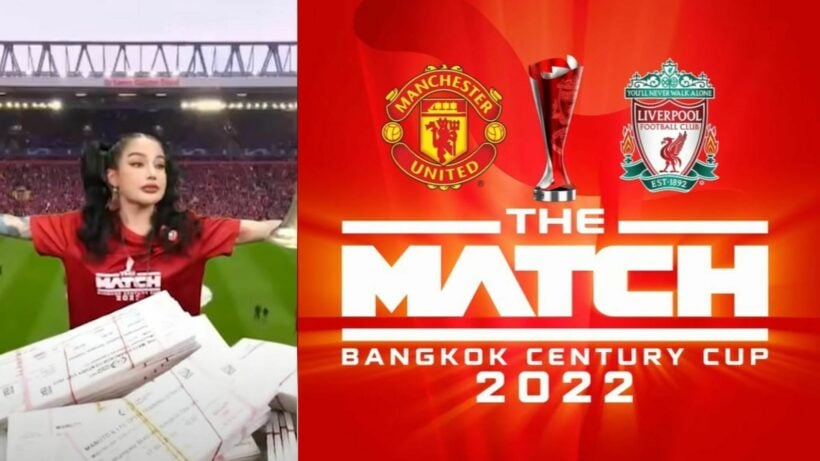 Social media influencer Pimradaporn Benjawattanapat, known as Pimrypie, is in the spotlight after announcing tickets for a game between Liverpool and Manchester United. She was offering perks like a dinner with the football players, which never happened, on her live stream.

She reportedly had 20,000 tickets with her for “The Match Bangkok Century Cup 2022”, which will be held next month at the Rajamangala National Stadium in the Ramkhampaeng district on July 12. She was offering the tickets for 4,000 to 5,000 baht, less than the original. prices.

Tickets were to be sold internationally, according to event organizer Fresh Air Festival, to promote Thailand as a travel destination for football fans. They were not made accessible by Thai ticket companies like Thai Major Ticket. Football fans who had already paid full price for the tickets were furious and blamed Pimmypie for his dodgy ticket offers.

It’s not just angry football fans, netizens in Thailand were outraged by her announcement and took to social media to voice their opinion on how she acquired so many tickets as they had never were planned to be sold in Thailand.

Premier League powerhouses Manchester United and Liverpool have spoken out against the illegal resale of tickets for the upcoming friendly. Both teams claim the tickets never came with the special perks that Pimrypie said they included. Premier League football clubs have come out to respond to Pimrypie’s statements once they have been promoted.

“We have not approved this sale, nor do we condone the content of the sale. It is misleading. Although the tickets for the match are genuine, there will be no dinner where the winner of the a competition will meet our first team players.

She further added that she had tickets to a dinner date with a Korean celebrity as well as Jackson Wang’s rehearsal of GOT7. Representatives for Jackson Wang took to Twitter, saying ‘there are no such tickets’

After the football clubs cleared the air, Pimrypie hopes the matter will now be resolved. Police are leaving open the possibility of bringing charges against the influencer if they are found to have deliberately misled potential ticket buyers.