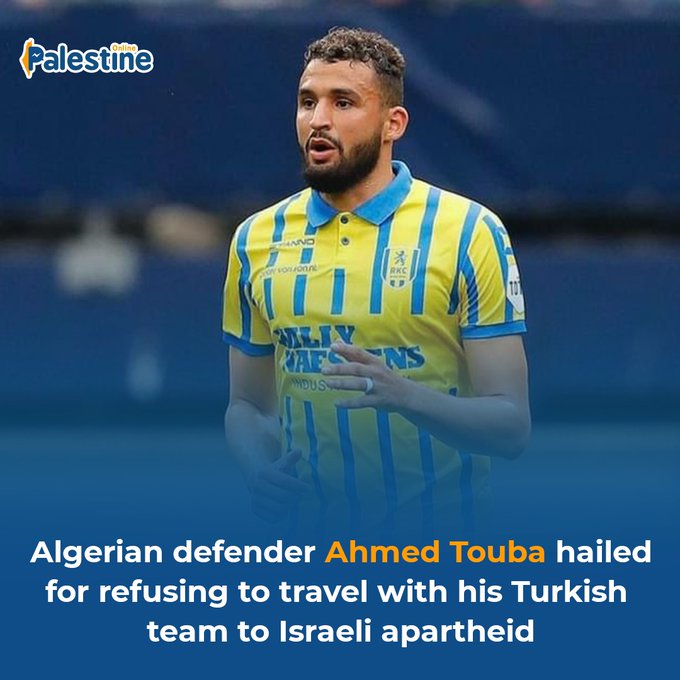 Istanbul Basaksehir traveled to Israel in the second leg of the preliminary round of Europa Conference League matches.

Touba also refused to take part in the first leg of the game in Istanbul.

“Algerian international footballer Ahmed Touba has been widely praised for his refusal to surrender to Israeli apartheid alongside his Turkish team,” Palastine tweeted online.

It is not the first time that a country has withdrawn from a tournament. Previously, Kuwaitis had refused to participate in events attended by Israelis.

In recent years, an increasing number of Arab athletes have avoided facing Israeli opponents in international competitions in support of the Palestinian cause.

At the end of January, tennis player Mohammed Al-Awadi also withdrew from the semi-final of the International Under-14 Championship in Dubai after learning that he was to face the Israeli player in the fourth round match. .

In January 2022, a Kuwaiti cultural delegation boycotted the Emirates Airline Literature Festival due to the participation of an Israeli writer.

In February 2021, Kuwaiti inventor Jenan Al-Shehab pulled out of Expo 2020 Dubai, due to the expo’s invitation to celebrate the occupied state and the Israeli president’s visit to Abu Dhabi.

On March 7, Kuwaiti watersports player Abdul Razzaq al-Baghli withdrew from the Emirates International Motorsurfing Championship in Abu Dhabi after refusing to compete against an Israeli competitor.

On May 3, Kuwaiti chess champion Bader Al-Hajri withdrew from the competitions of the Sunway International Chess Championship held in Spain during the current period, after being drawn against one of the players of the State of Israeli occupation.

In May 2022, Kuwaiti player Kholoud Al-Mutairi decided on Sunday to withdraw from the Thailand International Championship, in the fencing category, for refusing to face a player from Israel.