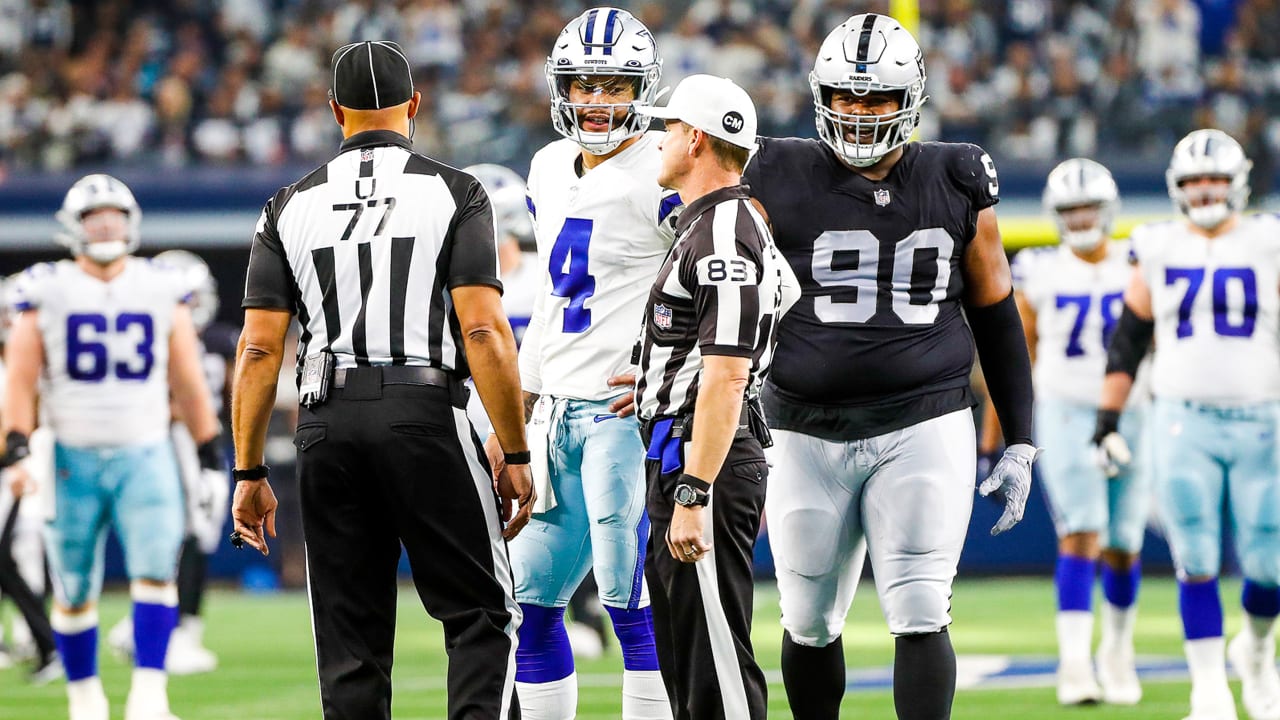 ARLINGTON, Texas – Since it’s Thanksgiving, let’s start with the good news: The Cowboys don’t play in the AFC West. If they did, not only would they likely be in last place, but winning a wild card spot would be a challenge.

So let’s be thankful for that, I guess.

But other than that, there’s so much to digest about this game that I hope it doesn’t ruin your appetite for your Thanksgiving meal, or a second or third serving.

And let’s jump right into the story, which unfortunately doesn’t start with either the Cowboys or the Raiders.

Hey, I played sports in college. I even played it once with a guy who called the game today for CBS, and another time here recently. But today was the busiest Flag Football game I have ever seen.

It was tackle football with protections and helmets, but the flags were the story of the game.

And that’s a shame. just shouldn’t never be the case. Believe me, this is not the end result. But 28 accepted sanctions is absurd. And yes, both teams were called 14 each. But it was so bad that while I preferred to see the Cowboys win that game, I was annoyed by the pending calls they called the Raiders in the fourth quarter – it was just ‘enough’.

But that wasn’t the case, even at the end of the game, when the Raiders were clearly just throwing the ball and hoping for a flag on Anthony Brown. Honestly, I give the Raiders credit for adjusting to this a lot more than the Cowboys. Because after the game I kept asking the players what the penalties were and how you need to change your approach knowing that the game is called that way.

Well, the Raiders found out early on that they could throw it deep at Brown and good things were going to happen – whether or not the ball was catchable or if the receiver even knew where the ball was. Either way, it was a good chance the flag was thrown.

Why haven’t the Cowboys tried this more too? Yes, they threw a few on the ground and a lot of them got caught. But it looks like it should have been something to try a bit more after seeing the way the game was refereed.

Honestly, I hate to sit here and write on the flags, but what else can you talk about? Even the games that cost this team the game ended in penalties.

Let’s just go back. The final placement was a bit easier for the Raiders due to a few offside penalties.

In overtime, of course, the interference of the third and 18th passes on Brown extended the Raiders’ run to win the game.

Prior to that, Dalton Schultz was apparently embarrassed in the middle of a game that shockingly went unrecalled. Even Schultz said, â€œIt’s just a bullet,â€ but again, if we’re consistent with the appeals, it needs to be thrown. If it was Brown, he could have been arrested and also reported for such contact.

I could go on and on on the refs, but then it was Christmas.

The Raiders also had some bad decisions against them, but they found a way to win the game. Their kicker didn’t miss any extra kicks or points. Their number 4 quarterback had a better game than the Cowboys number 4.

I’m not saying Derek Carr is better than Dak Prescott, but he was just a little better on Thursday, especially with his legs. Some of Carr’s runs got his team out of trouble where Dak struggled to try and pick up yards on the run.

We can sit here and talk about what the Cowboys are missing with their receivers, but obviously the Raiders would trade situations with Dallas, or any team probably, with that specific position.

But remember this, the Raiders had 509 attacking yards. Now, yes, some of those penalties have extended practice and given them more playing chances, but remember the Cowboys were reported for 166 yards, and none of that counts towards Las’s offensive total. Vegas.

The Cowboys had plenty of opportunities to leave the field, but just couldn’t. Yes, Amari Cooper and CeeDee Lamb were missed, but it’s not like Cedrick Wilson and Michael Gallup haven’t walked more than 100 yards each. But rushing the passer was a problem for the Cowboys. Micah Parsons was sacked in overtime, but most of the time they gave Carr too much time.

So maybe the return of Randy Gregory and DeMarcus Lawrence next week will give the defense a boost, especially if it pulls Parsons back into linebacker for some games.

Earlier this week, I thought it was a â€œup for grabsâ€ game for the Cowboys. And not a “must” to make the playoffs or even win the division. But I thought this team had to win the game to stop the bleeding, get their mojo back, and become the team they want to be.

This does not happen. Blame the injuries, blame the umpires, or blame the mashed potatoes if you like, but the Cowboys found no way to get over it all, losing their third and final game here in November. But as they turn the page on next week, they will turn the calendar as well.

Hey, maybe this is something they can be thankful for. That and not having to face any more AFC teams this year.