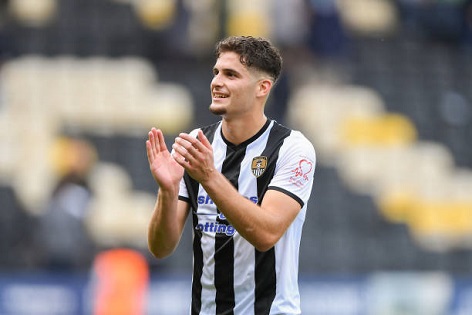 Covering the journeys of Portuguese players and coaches in today’s football means following the game in all four corners of the world. The exploits of Luso talent on the pitch and in the dugout extend far beyond the brilliance seen weekly in Europe’s major leagues and most visible continental competitions.

There are few major regions in football where Portugal haven’t made their mark recently. Yet among the hundreds of exports taking to the pitch each week, there was a certain charm in the story of a Portuguese striker scoring a hat-trick earlier this month for the oldest professional football club in the world. world.

Rúben Rodrigues picked up his hat-trick in early April for English county Notts, the famed East Midlands side, who currently play in the National League – the 5and level of the country’s deep football pyramid. Rodrigues has been in fine form all season but his three away goals at Southend caught the attention of his native media for the first time.

The 25-year-old has never played in Portugal, where he was born in Oliveira de Azeméis before his family emigrated to the Netherlands when he was a child. A modest rise through the Dutch ranks led to a move to Notts County in the summer of 2020, since when Rodrigues has become one of the Magpies’ standout players as they continue to struggle in the positions of promotion barrage.

Maisfutebol caught up with Rodrigues shortly after his Man of the Match show with the main aim of exposing a new name to his audience. Rodrigues has 15 league goals this season – already an improvement on last term’s tally of 12 – but it’s his trip to the famous Meadow Lane that has become the center of the conversation.

“My parents are Portuguese, I have an older brother who was born in Portugal and only my younger brother was born in Holland,” Rodrigues explained. “I went to live in Holland when I was four and a half, almost five years old. I don’t remember much from that time.

“My parents emigrated to the Netherlands to go to work. They left first, by bus. I stayed in Oliveira de Azeméis with an aunt. My brother stayed with a friend of my mother. After a few months, I went to live with them in a town called Best. First I went to an international school to learn the language, then I went to school. My brother stayed in Portugal for two more years to finish his studies, then he came to join us.

“My Portuguese club? Benfica. It’s my dad’s club and everyone at home is Benfica,” Rodrigues said, before revealing that a trip to watch Eagles host Liverpool would be his first-ever visit to the Estádio da Luz. “My teammate who comes from Liverpool and is on loan at Notts County is coming with me.”

Notts County was founded 160 years ago and was one of the original 12 members of the English Football League in 1888. After being relegated from the top flight the season before the formation of the modern Premier League in 1992 , the club’s descent down the divisions in recent decades does little to change their status as a household name in English football culture.

Asked by Maisfutebol about the reasons for the short trip to Britain, Rodrigues revealed that his footballing journey initially developed by chance and suffered many setbacks before embarking on a professional career.

“The story of how I started playing is curious,” he said. “My parents didn’t know the Dutch language, so we spent a lot of time at home and played in the garden. One day a man went to do some work at a neighbour’s, he saw me playing with my father and my brother and asked my father if I was in a club. “So he’s still out there playing in the garden, he’s not on any team?” My father said no, I was not in any club, then it was this man who took me and signed me up at my home club, which was called Boskant.

“I went there when I was eight years old. Then I tried out for PSV Eindhoven, I stayed there for six months, but they didn’t want to keep me. I went to Den Bosch for a few months, but didn’t stay there either. So I went back to Boskant and stayed there until I was fifteen, and Den Bosch called me back and I stayed there for two years, but I was very young, I didn’t have the maturity I needed and then I left.

“I went to a club called Wilhelmina. I stayed there four or five years. And that’s when things started to go well for me, I had seasons scoring around 40 goals. Then I went to VV Gemert, where I also scored a lot of goals and Den Bosch signed me again.

“Notts County noticed my stats, saw that I had scored a lot of goals over several seasons and called me to come and practice. I went there with my agent and it was a big change. For the first time, I went to live alone, in another country. My life had already started to change when I signed for Den Bosch, but moving to Notts County was the big change.

Beto wasn’t the only Portuguese to score a hat-trick this weekend. Rúben Rodrigues has scored three goals for the world’s oldest club Notts County in England.pic.twitter.com/ZshYKgG0PN

Rodrigues’ goalscoring tally increases with each season, leading to speculation of a move up the English ladder, with Lincoln City of League One and Championship sides Blackburn Rovers, Sheffield Wednesday and Championship Blackpool seen as admirers. However, despite the improved search from the back of the net, Rodrigues believes he is not a pure striker.

“I am a more mobile striker. The other players play a little more fixedly in the penalty area and I get more involved in the game. I dive deeper into the field and like to participate in the creation of the game.

“I am a striker like Roberto Firmino, who likes to get involved in the game, falls in midfield, manages to make long passes and creates assists for other players, especially for Salah and Mané. I am a bit like that too.

And where does Rodrigues dream of showing his qualities? Portuguese football, of course. And he tells the Maisfutebol that he has faith that it will happen one day. For now, the county has a promotion play-off location to worry about…

How to watch, calendar of events