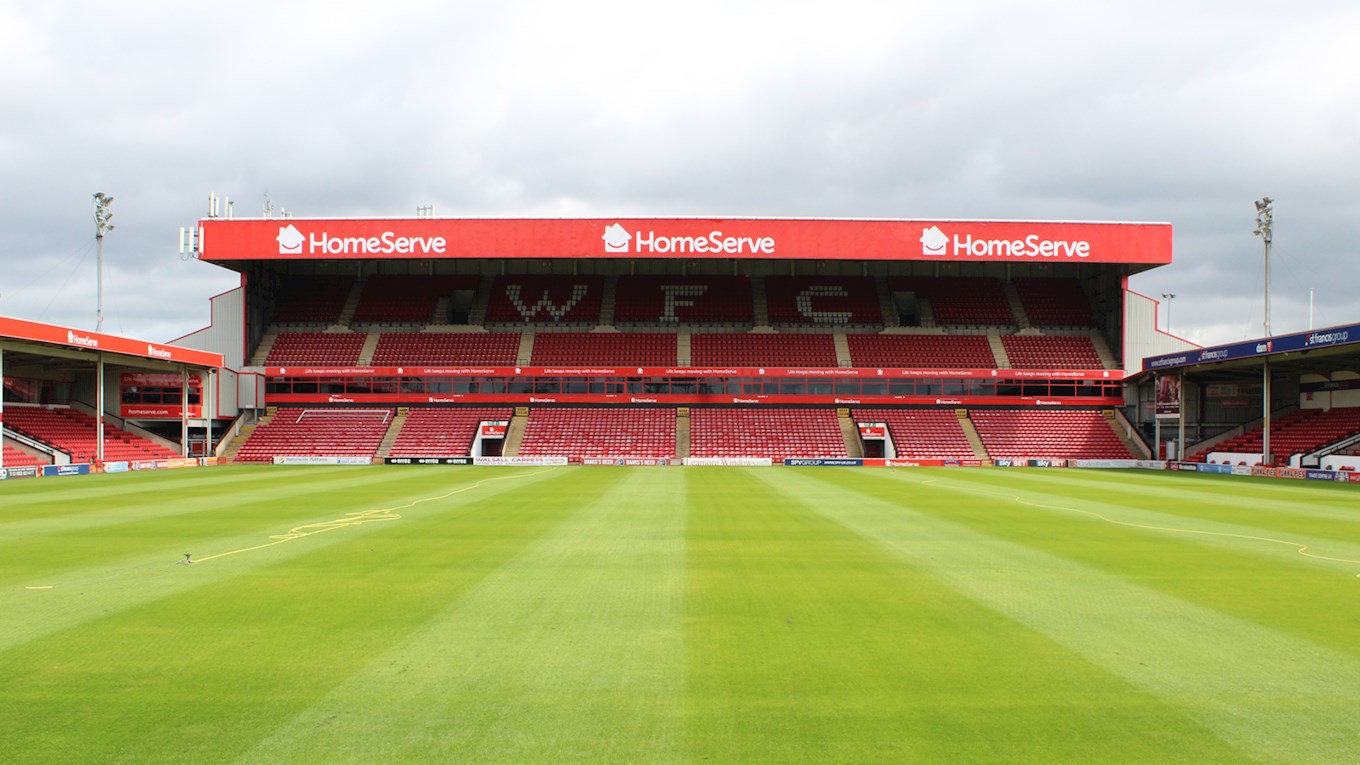 SG and GW thanked those who attended the meeting via Zoom.

SG addressed issues on the pitch and hinted at Saturday’s victory over Colchester United as our last home game this side of Christmas, with a heavy schedule ahead of us. SG spoke about recent global events regarding the pandemic and the Omicron variant and said the club is monitoring this closely. We have sent a notice to supporters regarding the protocols around the stadium when they arrive and SG added that those present should follow them as much as possible to ensure they are as safe as possible. The only mandatory requirement we ask for is to wear a face mask in indoor areas while you are moving / not eating or drinking. As we have less than 10,000 seats in the stadium, SG added that we do not need to have proof of vaccination / lateral flow tests when arriving at home games, but it is a landscape. constantly evolving and we will keep supporters informed if the protocol changes. .

SG then said COO Daniel Mole (DM) attended a meeting chaired by the EFL earlier today on the measures clubs need to put in place. SG has stated that it is the home club’s responsibility to tell us what our supporters should do when attending matches and that this information will be researched by ourselves and then released ahead of matches for the benefit of our supporters.

GW began by addressing the recent news that the Walsall FC DSA group has been disbanded due to a lack of committee members following an application process they initiated. GW mentioned that for any questions regarding supporters with disabilities, they can contact him or anyone else at the club directly.

Regarding SLO issues, GW said he received a strange email regarding the match day experience, but added that these are still being worked on.

Update from the Association of supporters of independent saddlers:

DB mentioned that the group hosted Chris Nicholl and his family at the Railway Club ahead of the Colchester United game. Chris saw the upgraded facilities, including the newly constructed booth and the new signage that was installed in his honor. DB added to the work in progress and said that all due diligence checks have been completed and everything is approved for them to turn the bowling alley into a state of the art 3G facility, which will be lighted and will accommodate 9 vs 9 and have new locker room blocks for players and officials. DB has confirmed that this work is expected to start at Easter and will be named Chris Nicholl Football Center in his honor. DB went on to say that it would be a rental center but totally non-profit and that it would offer free sessions to underprivileged children, with some ex-players agreeing to come and offer their experience and organize games. sessions. DB added that if anyone were to be highlighted in the sessions, they would look to move the club forward.

DB then mentioned that they had purchased a vehicle through their Majestic travel partners suitable for disabled supporters. The vehicle can accommodate 5 wheelchairs and 2 caregivers for each wheelchair and DB said they have made a message available for supporters with disabilities to get in touch. ISSA will reduce the travel costs of these supporters, which opens up another opportunity for supporters with disabilities to travel to away matches.

DB then referred to ISSA FC being strong in Warley League Division One and hoping that will continue to move forward.

DB then raised a question with SG regarding the items that were sent to the club in accordance with the licensing agreement between the two parties. DB said he had not received any correspondence from his contact at the club so they missed their Christmas stock order deadline and had no response or acknowledgment of royalty payments. DB said he had been informed that Alex Smith (AS) had left the club, SG confirming that was the case and adding that AS had been replaced by Adam Brearley (AB) who will begin the role in January. SG responded and said he would look into this matter urgently and apologized for the inconvenience. GW added to this and said that if they have any concerns in the future DB can contact him directly and he will sue him on his behalf.

DB then raised another issue with respect to copyright issues. DB said there are items advertised on the Trust website and on the 130-year history website which has the latest Walsall FC badge clearly attached to Adidas products. BA responded and said he was not aware of anything about it, but asked DB for more details after the meeting so he could take a look from his side. SG also said he had not received any notification about it, but said it needed urgent consideration as the club had not given their consent for the use of the Walsall FC crest. .

DB then asked SG whether Banks’s Stadium was a cashless venue across the board or not. SG said this was the plan, but reiterated that we sell gift cards which can be purchased for cash if supporters don’t have a credit / debit card. SG added saying that we hope to phase this out over time. GW mentioned that the only difference is with the tuck store in the community booth which accepts cash payments (although this is controlled by the community program, not the club). DB went on to say that the issue arose as a result of an unrelated event that took place at the stadium in recent weeks, which he attended. DB said they were encouraged to pay cash for drinks on the evening of the event by bar staff. SG said that shouldn’t have been the case and said he would look into this offline. BA responded and understood that at present the stadium is cashless with the exception of parking / match schedule sales on match day. SG said parking lot stewards had adding machines to allow people to pay for parking by card, but said they had been pragmatic in some cases if there was a large queue and that a supporter was unable to pay by card. DB said for every home game this season he has been asked to pay for parking in cash, SG saying he will speak to relevant staff offline and ensure this is communicated to those present on the day. as they should use it. the sum machines in the first place.

DB then looked at the issues on the pitch and asked if the club are in a position to strengthen themselves in the January transfer window by buying players, or if they plan to tap into the loan market. DB also asked if it was possible for the players on loan to be recalled by their clubs. In response to the first question, SG said there were funds available in January which will be up to Jamie Fullarton (JF) and Matt Taylor (MT) as to how they decide to use them. Right now we already have five players on loan, so if we are looking to attract other additional loan players, we will need to convert some of the existing loans to permanent deals. SG reiterated that we want to bring in players who won’t just be here by the end of the season; this is something more long term although it is not always possible to do it and get the players of the required quality. Regarding the recall of players on loan, SG said that at this time he has not had any conversations with any parent club. JF is pretty confident it won’t happen, but SG added that if it does, we will have replacements.

BA thanked the club on behalf of the Trust for their assistance in organizing the annual Christmas toy drive / food bank and memorial service. BA said the tables were filled with donations from supporters and thanked everyone for their contributions as well as the Poundland club partners who also donated. BA is hoping a first-team player can make it to Manor Hospital this Thursday for the handing over of these donations, despite concerns about the Omicron variant. This is arranged between the Trust and the football club. BA also extended his thanks to the MT head coach who was present at the service alongside GW, DM and other club members. BA also praised the work of Reverend Club Chaplin Lance Blackwood and Ellen-Thorpe Wood of the Trust who organized the service outside the main reception. The food bank donation that was originally intended for the organization of Project Thomas in Aldridge is also linked to Express & Star’s Feed a Family at Christmas campaign. The cooperative collected a number of food and drink vouchers for donation and BA also thanked them on behalf of the Trust.

BA then added that the Trust continued to try to attract new members, but still had issues with the previous administration which it continued to address alongside this one.

BA then referred to the fan-led review where Tracey Crouch (TC) bought a list of recommendations and asked if the club had a chance to / were asked to respond formally, as we were one of the contributors. . SG responded and said we won’t be making a formal, club-specific response to this. SG mentions that he and Chairman Leigh Pomlett (LP) were interviewed by TC along with a panel of other people who contributed to the report. SG believes the EFL supports the majority of the recommendations and that there will be a Common League response to follow. SG alluded to the statement we released ahead of Saturday’s game and said the supporters were following protocols impeccably and were very reasonable. As updates occur, we will notify supporters accordingly.

Next meeting on Monday 10e January.